The comments have been busy with conversations about God’s command that the Israelites should kill Canaanites, sometimes even the Canaanite children. 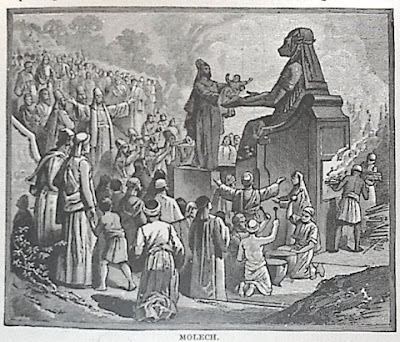 King Saul, the first king of Israel, slew all the Amalakites (men, women, children, infants), but did not kill all their livestock. For this disobedience, King Saul lost the crown, which was given to King David.

I’ve been pondering these difficult verses. God commanded killing…children? Also, why is there a gradation in God’s command regarding Canaanites? I can understand the first one easily. Idolatrous men are dwelling in the Promised Land. When combatants (males) confront Israel, then Israel kills these men. That make sense.

Yet (2) and (3) are more difficult to understand since in these passages God directly commands the Israelites to kill Canaanite children.

The key here, I think, is the final inclusion of livestock in number (3) regarding the Amalakites. This got me thinking. Children and livestock are not moral agents. Children reach the age of reason somewhere between the age of 5 and 10 years – usually 7 years. Therefore, small children cannot be culpable of sins.  These pagan children have original sin, so did all Gentiles. Original sin alone cannot qualify these children for death under the Israelite sword. Moreover, animals are not culpable of sin. So why would God want these children and animals killed?

Suddenly, an answer appears. These people were irrevocably given over to Satan and his demons. Demons can posses children and they can possess animals. Do you remember this passage:

The devils therefore went out of the man and entered into the swine. And the herd ran violently down a steep place into the lake and were stifled.” (Luke 8:33, D-R)

God ordered the deaths of children and animals in the last case because the men, women, children, and animals were possessed by devils. It would not be fitting for Israel to adopt demon-possessed children and demon-possessed livestock. These pagan people consecrated their children and livestock to Baal who is a devil. Imagine if you poured goats blood on a baby and baptized the child for the devil. Would that baby have spiritual problems? You bet. These Canaanite children had been handed over to the devils that their parents worshiped.

For all the gods of the Gentiles are devils, but the Lord made the heavens.” (Psalm 95:5, D-R)

There is archaeological evidence to support that these enemies of Israel consecrated their infants to these devils. Archeologists have found that it was common for these Canaanites tribes to sacrifice an infant and place its body in the foundation of their house as some sort of bizarre “house blessing” ritual.

Their religious sites are filled with two things: the skeletons of sacrificed children and fertility figurines with enlarged sex organs. Ezekiel 16 indicates that pagan people (and even corrupted Israelites) masturbated with these sexualized idols.

It should not surprise us that Satan and his devils focused on these poor peoples, since the devils knew that God desired Israel to live in the Promised Land and eventually that Christ would be born, die, and resurrect in this land. So Satan had been busy poisoning the inhabitants against the true God and His people Israel. This is why these Canaanite nations attacked Israel. They were attacking God.

In brief, it was a mercy for these children to be killed by Israel. If they grew up, they’d be demon worshipers and would plunge into Hell. If they were slain, they would simply go the limbo of the children where they would enjoy natural happiness.

As for the animals, killing these would free them of the devils.

This is merely my (working) hypothesis. It may be faulty and thoroughly incorrect, or perhaps it may bring some clarity. Remember also that the Jews did not have the sacrament of baptism which could have delivered these infants, and they did not have a ministry of exorcism that we have today in the Catholic Church.

Category: Scripture
Disclosure of Material Connection: Some of the links in the post above are “affiliate links.” This means if you click on the link and purchase the item, I will receive an affiliate commission. Regardless, I only recommend products or services I use personally and believe will add value to my readers. I am disclosing this in accordance with the Federal Trade Commission’s 16 CFR, Part 255: “Guides Concerning the Use of Endorsements and Testimonials in Advertising.”