In the comments below regarding God’s command to stone sinners for certain crimes in the Old Law, (see Deut 12:10), the topic of Israelite genocide came up. Especially with the advent of the New Atheists, there is an allegation that the God of Israel commanded “genocide.” As we saw previously, God has commanded the death of certain individuals, but did He also command the death of an entire race or entire races? 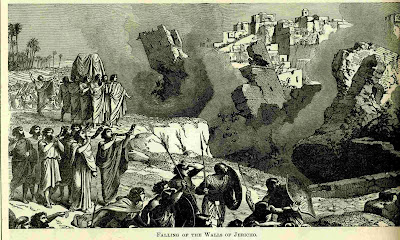 Their argument of “Israelite genocide” comes chiefly from the 20th chapter of Deuteronomy:

[16] But of those cities that shall be given thee, thou shalt suffer none at all to live: [17] But shalt kill them with the edge of the sword, to wit, the Hethite, and the Amorrhite, and the Chanaanite, the Pherezite, and the Hevite, and the Jebusite, as the Lord thy God hath commanded thee: [18] Lest they teach you to do all the abominations which they have done to their gods: and you should sin against the Lord your God.

Here God commands that the cities of six peoples be destroyed. Remember the context. The Israelites are about to re-enter the Promised Land and conquer the land as their own. When they come across these six peoples, they are to kill them all. Why? It has nothing to do with genetic inferiority or genetic impurity. Rather, these six peoples practice “abominations” that will lead Israel to abandon God.

Now opponents of Christianity will cite this verse to the horror of their audience in order to prove that the God of Israel is either cruel or just as capricious as Jupiter or Allah.

How do we answer the genocide questions?

Check the context. The part that is often left out is the section immediately preceding the passage above from Deuteronomy 20. My commentary is in red:

[10] If at any time thou come to fight against a city, thou shalt first offer it peace. {Hence, God doesn’t order absolute genocide, but first offers peace to all the cities of the pagans.} [11] If they receive it, and open the gates to thee, all the people that are therein, shall be saved, and shall serve thee paying tribute. {If they accept the peace offered by Israel they will be saved, but will have to pay taxes to Israel since Israel rightfully owns the promise land by God’s command} [12] But if they will not make peace, and shall begin war against thee, thou shalt besiege it. [13] And when the Lord thy God shall deliver it into thy bands, thou shalt slay all that are therein of the male sex, with the edge of the sword, [14] Excepting women and children, cattle and other things, that are in the city. And thou shalt divide all the prey to the army, and thou shalt eat the spoils of thy enemies, which the Lord thy God shall give thee. [15] So shalt thou do to all cities that are at a great distance from thee, and are not of these cities which thou shalt receive in possession.

Certainly the six peoples listed above, the Hethite, and the Amorrhite, and the Chanaanite, the Pherezite, and the Hevite, and the Jebusite, were treated more strictly since even their women and children were to be slaughtered if they did not accept the peace of Israel (consult verse 16 which places a stricter judgment o these people). Nonetheless, we know from history that some of these people did receive Israel and were not only preserved, but began to worship to the true God of Israel.

For example, in 2 Samuel 24:18 we read, “And Gad came to David that day, and said: Go up, and build an altar to the Lord in the threshing floor of Areuna the Jebusite.” Here then is a land-owning Jebusite living in Jerusalem. David doesn’t kill him. He makes a deal with him. In fact, this Jebusite even offers his land for free to King David so that the Temple will be built there. He even tries to freely give his oxen for the sacrifice to God! Even so, David reward the Jebusite for paying him a fair price anyway. So much for absolute genocide against the Jebusites!

Another example is Rahab, the keeper of the lodge in Jericho is also an example of a woman, who with her household, was saved by receiving Israel and converting to the God of Israel.

Here’s a follow up post I wrote on the killing of their children by Israel: Why did God Order the Death of Gentile Infants: A Possible Solution.

Categories: History, Scripture
Disclosure of Material Connection: Some of the links in the post above are “affiliate links.” This means if you click on the link and purchase the item, I will receive an affiliate commission. Regardless, I only recommend products or services I use personally and believe will add value to my readers. I am disclosing this in accordance with the Federal Trade Commission’s 16 CFR, Part 255: “Guides Concerning the Use of Endorsements and Testimonials in Advertising.”