Did Mary give the Rosary to Saint Dominic? Is it a historical fact?

Catholic tradition states the Blessed Virgin Mary directly and personally instituted the Holy Rosary through Saint Dominic. A previous post described the traditional account of “How Mary Gave the Rosary to Saint Dominic.”

In this second post we examine the historical-critical objection claiming that the Rosary was an organic development of medieval piety and that Mary did not directly give the Holy Rosary to St Dominic.

I believe this modern claim is incorrect and too simplistic. It’s perfectly reasonable to believe that Mary gave the Holy Rosary to Saint Dominic. Here’s why…

The Claim Against Mary Giving the Rosary

First, let’s examine the modernist argument against the Marian origin of the Holy Rosary. Some moderns hold that the traditional account depicting Mary giving the Rosary directly to St Dominic is a pious etiological myth. This myth, they say, allegorizes the origin of the Rosary with the Dominican order.

These moderns observe that the practice of praying Our Father’s and Hail Mary’s on beads is a practice that predates Saint Dominic, and that this “Rosary” gradually evolved. This fact, they claim, further substantiates the conclusion that the Holy Rosary is not a revealed gift given directly to Dominic by the Blessed Virgin Mary herself. 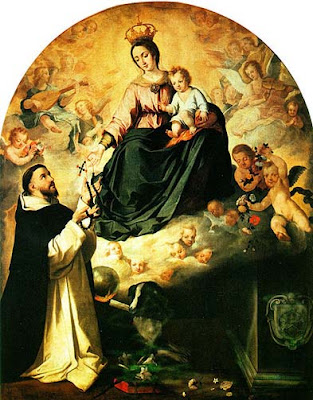 While it is certain that many (East and West) prayed on beads prior to Saint Dominic, the original claim is that the Holy Rosary as a collection of 150 Hail Mary’s with the 15 Mysteries (Joyful, Sorrowful, Glorious) was literally and historically given to Saint Dominic by the Immaculate Mother herself.

Summary of Points So Far:

1) Moderns claim that the tradition of Mary giving the Rosary to Dominic is an etiological myth.

2) It is true: praying Our Fathers and Hail Marys on beads predates Saint Dominic (in fact, the word “bead” comes from the word “bid” meaning “pray” or “ask”).

What does the Catholic Church say?

Pope Leo XIII, in his encyclical Octobri mense, teaches that the Rosary does in fact have its origin from the Immaculate Mary herself “by her command and counsel” to Saint Dominic. Pope Leo XIII teaches:

“That the Queen of Heaven herself has granted a great efficacy to this devotion is demonstrated by the fact that it was, by her command and counsel, instituted and propagated by the illustrious St. Dominic, in times particularly dangerous for the Catholic cause.”

Pope Leo XIII also clarified that this original institution of the Holy Rosary by Mary included the Joyful, Sorrowful, and Glorious Mysteries, which he calls the “great mysteries of Jesus and Mary, their joys, sorrows, and triumphs.”

In his Supremi Apostolatus Officio, Pope Leo XIII again confirms the supernatural origin of the Holy Rosary of Saint Dominic:

Great in the integrity of his doctrine, in his example of virtue, and by his apostolic labors, he proceeded undauntedly to attack the enemies of the Catholic Church, not by force of arms, but trusting wholly to that devotion which he was the first to institute under the name of the Holy Rosary, which was disseminated through the length and breadth of the earth by him and his pupils. Guided, in fact, by divine inspiration and grace, he foresaw that this devotion, like a most powerful warlike weapon, would be the means of putting the enemy to flight, and of confounding their audacity and mad impiety. Such was indeed its result. Thanks to this new method of prayer—when adopted and properly carried out as instituted by the Holy Father St. Dominic—piety, faith, and union began to return, and the projects and devices of the heretics to fall to pieces.”

The tradition is further confirmed by the apparition of the Immaculate Mary to Blessed Alan de la Roche:

My son, you know perfectly the ancient devotion of my Rosary, preached and diffused by your Patriarch and my Servant Dominic and by his spiritual sons, your religious brothers. This spiritual exercise is extremely agreeable to both my Son and to me, and most useful and holy for the faithful.  When my Servant Dominic started to preach my Rosary … the reform in the world reached such heights that it seemed that men were transformed into angelic spirits and that Angels had descended from Heaven to inhabit the earth. … No one was considered a true Christian unless he had my Rosary and prayed it. … The prestige of the holy Rosary was such that no devotion was or is more agreeable to me after the august Sacrifice of the Mass.”

Question: Do you find comfort in the fact that Mary directly intervened and instituted the Rosary? You can leave a comment by clicking here.

Recommended sermon: Power and Promises of the Holy Rosary

Recommended book: The Secret of the Rosary

Categories: History, Liturgy, Mary
Disclosure of Material Connection: Some of the links in the post above are “affiliate links.” This means if you click on the link and purchase the item, I will receive an affiliate commission. Regardless, I only recommend products or services I use personally and believe will add value to my readers. I am disclosing this in accordance with the Federal Trade Commission’s 16 CFR, Part 255: “Guides Concerning the Use of Endorsements and Testimonials in Advertising.”