In the year 1214 Saint Dominic, the founder of the Order of Preachers, was in anguish because he was failing in his attempt to convert the Albigensian Cathar heretics. St. Dominic attributed this to the deepness and gravity of sinfulness of the heretics and the poor example of Catholics. He went alone in to the forest and wept and prayed continuously for three days to appease the anger of Almighty God. He flogged his body and scourged his flesh. From the fasting, pain, and exhaustion, he passed in to a coma. 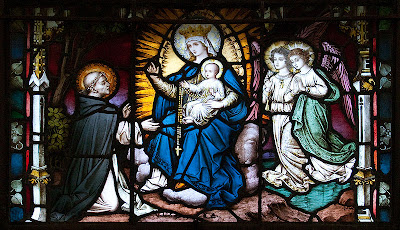 Dominic experienced an apparition of Blessed Mother Mary while in the coma, which forever links Saint Dominic and the Rosary. The Immaculate Mary with three angels appeared and asked St. Dominic, “Dear Dominic, do you know which weapon the Blessed Trinity wants to use to reform the world?” Dominic’s response was Blessed Mary knew better than he because she is a part of our salvation.

Mary responded, “I want you to know that, in this kind of warfare, the battering ram has always been the Angelic Psalter* which is the foundation stone of the New Testament. Therefore if you want to reach these hardened souls and win them over to God, preach my Psalter.”

Shortly after this apparition he preached the Holy Rosary to the unconverted Albigenisan heretics. To modify the Paternoster (150 Our Father’s) and in compliance with the instruction in the apparition, the design of the Saint Dominic Rosary came in to being. He set apart fifteen mysteries of the rosary, grouped them in to three sets of five decades each.

The groupings were designated as Joyous Mysteries, Sorrowful Mysteries and Glorious Mysteries. This design helped the Albigensian heretics to better understand and to imitate the virtuous life of our Lord Jesus Christ and the Immaculate and Blessed Mary.

* The “Angelic Salutation” is the “Hail Mary” prayer and the Psalter is the 150 Psalms. Thus, she wanted 150 Hail Mary’s – which is what the Holy Rosary is – 15 decades of Hail Mary’s with 15 corresponding mysteries to contemplate.

Two recommended books on the sweet and Immaculate Mary: one by Saint Louis de Montfort, the other by Saint Alphonsus Liguori. You can’t go wrong with either…or both!

Why didn’t Thomas Aquinas want to be a bishop?