In the Cathedral of Foggia one can find an ancient and mysterious image of the Blessed Virgin Mary. This icon, called “Our Lady of the Seven Veils,” once caused Saint Alphonsus to go into ecstasy, which I will describe below. As a young priest, St Pio of Pietreclina would make a visit to this image every day. I’ve read about the image, but knew nothing about it. I did some research and here is what I found. 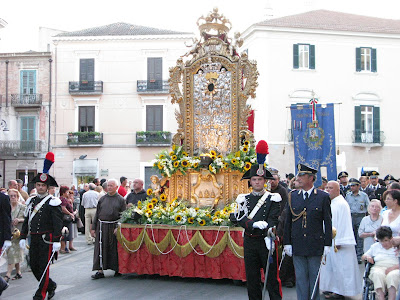 Madonna of the Seven Veils, Foggia

In the eleventh century Foggia, Italy was a tiny town perched around the Tavern of the Owl. One day some local farmers saw three flames over a small pond or bog. Intrigued, they dug where the miraculous fire had been and discovered a large “table” buried in the mud. They realized that this “table” was actually a Byzantine icon that had remained somewhat preserved despite being soaked in water and mud. The image was cleaned and then cloaked with new veils. I assume there were seven veils and hence the name, but I cannot verify this. The icon was then placed in the local Tavern of the Owl for veneration. Soon the tavern became a place of pilgrimage.

In 1080 Robert Guiscard built a church to honor the sacred image. In 1172 the church was expanded by William II “the Good” of Sicily.

The “face hole” is all that one can now see of the original wooden icon. It is black and the face is now indiscernible. However, on Maundy Thursday of 1731, the Virgin Mary’s white face appeared in this portal, which was usually black and dark.

As the city grew larger, the church was decorated and enriched. The Normans, Swabians, Angevins, Aragonese, Spaniards, and Bourbons considered the church to be one of the most important in Italy. It has served as the site for several royal weddings. Today, the image is said to be covered in seven layers of precious metal and embroidered material – hence the name Madonna of the Seven Veils.

Please take a moment to listen to my podcast on Our Lady of the Seven Veils. It’s free at iTunes. Or you can just listen to it by clicking here. 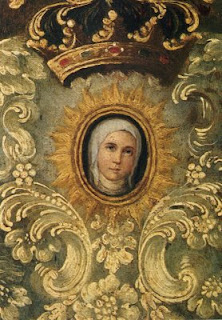 Sweet Mother Mary, pray for us