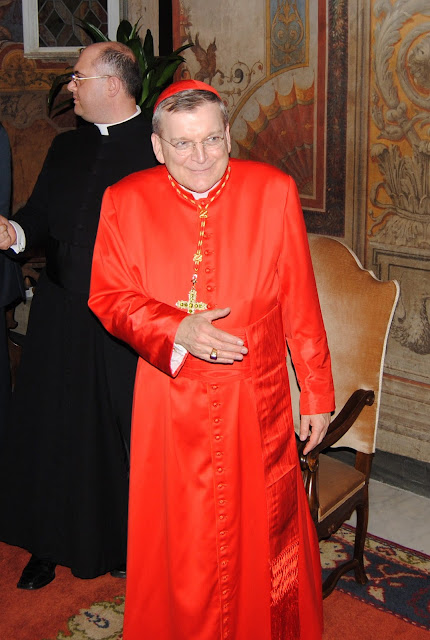 His Eminence Raymond Cardinal Burke
The Cardinal Who Will Be Pope

There are two objections that keep coming up both here on Canterbury Tales and on Facebook/Twitter.
We need to address both of these objections. I think you’ll be satisfied with the answers – and see that neither objection holds water:
First Objection:  Cardinal Burke will not be elected because he doesn’t know Spanish. He knows English, Latin, French, Italian, but not Spanish, they say. Folks are rightly claiming that it is inconceivable for a Pope to be ignorant of Spanish given the growing importance of Latin America in the third millenium of the Catholic Church.
Answer to First Objection: Cardinal Burke is able to speak and write in Spanish and has delivered many bilingual homilies at the Shrine of Our Lady of Guadalupe in La Crosse, Wisconsin. Just ask the folks who have served with him. He may not be an expert in Spanish, but he can manage to preach and write in Spanish.
Second Objection: Cardinal Burke is American and the Cardinals know that the world will resent a Pope from the world’s leading super power – the United States.
Answer to the Second Objection: People aren’t thinking clearly about this. Cardinal Burke would be the perfect Pope, precisely because the global tribe looks at America with suspicion. Cardinal Burke is an American who vocally disapproves of America. He isn’t wining and dining with President Obama, Joe Biden, are the other power players of Washington DC and New York. As I wrote yesterday, Cardinal Burke has called President Obama “anti-life and anti-family.”
Cardinal Burke isn’t going to pander to America’s claims of greatness and superiority. Rather, His Eminence would attack and destroy those claims.
In fact, Cardinal Burke is the cardinal with the clearest voice speaking against the crimes of the United States. Is America an emerging super Evil Empire spreading porn, abortion, materialism, perverse marriages, and filth all over the globe? Yes.
Would a Third World Pope know how to stand down this First World evil? Most likely not. Would a Third World Pope be taken seriously be First World powers? Probably not.
You need a holy American who is not afraid to speak out against his homeland. Which American Cardinal has the hardest words for America? Cardinal Burke.
This last objection actually becomes one of the best arguments for Cardinal Burke.
If you missed it, please see Pope Prediction: 10 Reasons Cardinal Burke Will Be the Next Pope and join in on the great conversation. Please consider subscribing to my blog Canterbury Tales for FREE. CLick here to receive new daily posts instantly through e-mail.
Please also explore Taylor’s books about Catholicism at amazon.com.
Comment | Share | Tweet | Buffer | print | email