Yesterday we asked the question, “Did the Blessed Virgin Ask Pope Benedict to Step Down?” 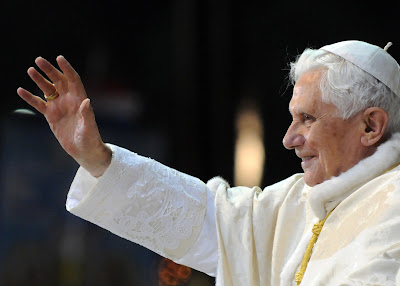 To review, there is a suggestion that Pope Benedict XVI received a special locution or apparition from Our Lady about the Catholic Church and gave him explicit permission to step down from the Holy See.

On the day His Holiness announced his resignation, the Pope publicly referred to Mary as the “Mediatrix of All Graces.” Pope Benedict entrusted the mission of the Pontifical Council for Health Pastoral Care “to the intercession of the Blessed Virgin Mary Immaculate, Mediatrix of all graces (Mediatricis omnium gratiarum).”

Many other news sources and blogs jumped onto this story because it signals something new in Pope Benedict’s thought. Pope John Paul II frequently employed the title “Mediatrix of All Graces.” However, Pope Benedict has been reticient up until recently.

[If you’re interested in the theological difference between “Mediatrix of All Graces” and just the simple title “Mediatrix,” please click here.]

It’s no secret that the young Father Joseph Ratzinger at the Second Vatican Council was openly opposed to the term “Mediatrix of All Graces” preferring instead “Mediatrix.” It seems now that the Holy Father has reversed course and has made Mediatrix of All Graces part of his papal vocabulary. This is a major event in the life of the Catholic Church. Saint Louis de Montfort said that all the saints of the later ages will be deeply Marian. Mary is the channel of all grace and sanctity.

Questions: Is Pope Benedict XVI paving the way for the future declaration of the Fifth Marian Dogma (“Mediatrix of All Graces”)? Does His Holiness’ use of this Marian title indicate an even deeper devotion to Our Lady? What would happen in our era if a Pope declared a Fifth Marian Dogma?

Privacy Guarantee: Your e-mail will never be shared with anyone. Please also explore Taylor’s books about Catholicism at amazon.com.