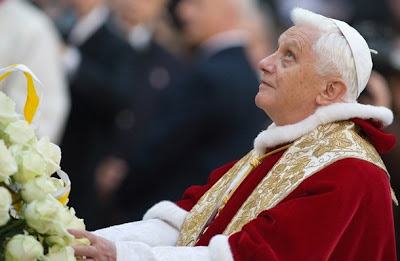 Did Mary Reveal Something to Pope Benedict?
How does a Pope make the decision to resign from the Papacy? The effects of such a decision are staggering. It’s a decision that affects every Catholic, and even every person on earth. He is the Vicar of Christ. His prayers and actions (through participation in the High Priesthood of Christ) win graces for the world.
It is obvious that Pope Benedict XVI appreciates and venerates the Petrine Office. His Holiness also has a profound understanding of redemptive suffering. Pope Benedict, it would seem, would desire to fight it out to the end. Failing physical health and old age have captured Pope since Saint Peter. Surely, poor health alone would not lead our Holy Father to step down from the Holy See of Saint Peter.
This raises the question: Why, then, is Pope Benedict making this historic decision? Is his decision based solely on poor health…or something else?
I recently heard a homily from a priest that I greatly admire. This priest suggested that Pope Benedict was getting “orders from above.” Pope Benedict, after all, does have a superior whom he must obey: Jesus Christ Our Lord.
This priest suggested that Pope Benedict received a message or apparition from the Blessed Virgin Mary. This is speculation, but the announcement of His Holiness’ abdication on the Feast of Our Lady of Lourdes may indicate a Marian origin to his decision.
There are enemies both inside and outside the Catholic Church. Personally, I believe there is spiritual rot festering in the machine work of the Vatican. When he became Pope, His Holiness referred to the “wolves” that were within the Church. It is no secret that there are cardinals who are opposed to Pope Benedict. I suspect (and this is pure speculation), that Heaven is about to intervene in a way that we could never foresee.
I believe that Pope Benedict would have never resigned unless he was told to do so through a heavenly command. I believe that Jesus and Mary told His Holiness to make this historic decision and announcement. Our Lady is the Exterminatrix of Heresies. She is about to clean house.
As Saint Peter (our first Pope) once said:
“For the time is, that judgment should begin at the house of God.” (1 Pet 4:17)
Pope Benedict XVI implicitly indicated that he had received a heavenly command just the other day is his final Angelus address from the papal window:
“But this does not mean abandoning the Church, indeed, if God is asking me to do this it is so that I can continue to serve the Church with the same dedication and the same love with which I have done thus far, but in a way that is better suited to my age and my strength.”
– Pope Benedict XVI “Angelus Address” Feb 23, 2013.
Divine judgment begins first with His own people. The resignation of Pope Benedict may be the first domino to fall leading to a chain reaction of important events. Again, I think we are seeing a mystery of supernatural intervention. Who would have thought that Year of Faith would require so much faith!
Keep praying the Rosary daily, go to confession weekly, say your morning and evening prayers, begin reading the Bible daily. Make it a good Lent.
Question: Do you also think that Pope Benedict is responding to a command from heaven? Is Our Lady guiding him through these final days of his pontificate. Please leave a comment and share your thoughts on this heavy matter.
Do you enjoy reading these posts by Dr. Taylor Marshall? Make it easier to receive daily posts. It’s free. Please click here to receive daily posts through e-mail. Privacy Guarantee: Your e-mail will never be shared with anyone. Please also explore Taylor’s books about Catholicism at amazon.com.
Comment | Share | Tweet | Buffer | print | email