November 21 is the Presentation of the Blessed Virgin Mary. This feast has always been celebrated as a commemoration of Mary being presented in the Temple at the age of three years by her parents St Joachim and St Anne. Mary lived in the Temple precincts until the age of 14{*} when she was betrothed to Saint Joseph. 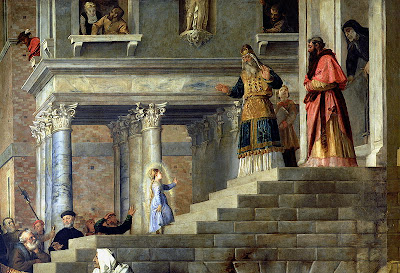 Modern “sophisticated scholars” cast doubt on this tradition as pious legend. However, by the 400s it was universally believed that Mary lived at the Temple from the age of 3 till 14.{**} Moreover, the Church Fathers and the Doctors of the Church confirm that the Blessed Virgin was in fact consecrated at the Temple to serve therein. Since the Temple is a symbol of the Garden of Eden, Mary’s entry reveals that the New Eve has finally arrived and come into the presence of God.

This Patristic tradition reveals how the earthly Temple in Jerusalem would mystically give way to the true New Temple and Ark of the Covenant which is the body of Mary in which the Son of God would be incarnate. In ancient cultures, the age of three was a time of transferal from infancy to childhood since at this time infants were fully weened from their mother’s breast and potty trained.

So at that this time, St Joachim and St Anne dedicated the Blessed Virgin at the Temple where she lived till the age of 14. At this age, girls came into their womanhood and were no longer allowed to dwell in the holy place. So Mary was then betrothed to St Joseph. Returning to Nazareth, the angel of the Lord announced unto her the glad tidings of her Messianic Son.

Is there any biblical basis for this tradition? Of course.

Traditionally the Catholic Church reads the Old Testament passage from Sirach 24:14-16 at the Holy Sacrifice for the feast of the Presentation on November 21st. This passage prophesies how the Blessed Mother would dwell in Jerusalem and within the Temple precincts:

In the holy dwelling place I have ministered before him. And so was I established in Sion, and in the holy city likewise I rested, and my power was in Jerusalem. And I took root in an honourable people, and in the portion of my God his inheritance, and my abode is in the full assembly of saints.

The fact that the Church has placed these words into the mouth of Mary in the Sacred Liturgy further reveals that the Church believed that Mary “ministered” before God “in Sion/Holy City/Jerusalem.”

This is a good reminder that the liturgy is catechetical – it is fact that great catechetical instrument of Holy Mother Church.

Our Lady Seat of Wisdom, pray for us.

* The Jewish historian Josephus mentions that there were quarters for consecrated women to live in at the Temple.

** St Gregory of Nyssa, in the fourth century, also mentions this feast of the Virgin’s Presentation. Saint Helen built a chapel in Jerusalem to commemorate the event.