Saint Paul mentions an interesting detail: that the resurrected Jesus appeared to 500 people! That’s a big deal. Why isn’t it mentioned in the Gospels (or is it)? We’ll explore this detail in this post:

In 1 Corinthians 15, Saint Paul recites what seems to be a formula or creedal statement about the resurrection of Christ. I’ll bullet point it to make it clear:

For I delivered to you as of first importance what I also received:

Here we have the kernel of the Apostles Creed (died, buried, rose on third day) but appended to it six resurrection appearances. Five apparitions and then finally one apparition to Saint Paul himself. 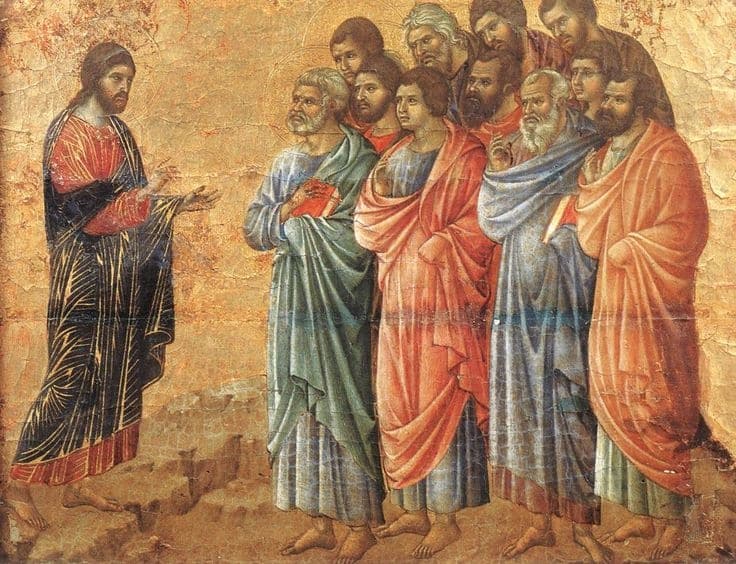 Paul speaks of the resurrected Christ appearing to “more than five hundred” and this event is recorded nowhere in the four Gospels or within St Luke’s Acts of the Apostles. So what is Saint Paul describing?

Christ Appearing to Over 500?

There are 4 opinions on this “500 witnesses event”:

The majority position is (2) that this happened in Galilee when the Apostles went back to Jerusalem to witness Christ there. Here’s why this is the best answer:

It could also be that Saint Matthew records the “500 Event” as having occurred in Galilee without mentioning “500”:

“The eleven disciples went away into Galilee, into a mountain where Jesus had appointed them. And when they saw him they worshipped him, but some doubted” (Mt 28:16-17).

Matthew speaks only of the 11 living Apostles but says “some doubted.” Surely the 11 didn’t doubt at this time since it follows the “doubting Thomas” event that happened 13 days after the Resurrection in Jerusalem. So it could be that “some doubted” refers to “some of the 500 doubted.”

Question: I’d love to hear others weigh in on this topic. Who were the five hundred and when did it happen? I think it was the Galilee Event but I’m open to other ideas. You can leave a comment by clicking here.

Categories: Acts, Church Fathers, History, Paul, Scripture
Disclosure of Material Connection: Some of the links in the post above are “affiliate links.” This means if you click on the link and purchase the item, I will receive an affiliate commission. Regardless, I only recommend products or services I use personally and believe will add value to my readers. I am disclosing this in accordance with the Federal Trade Commission’s 16 CFR, Part 255: “Guides Concerning the Use of Endorsements and Testimonials in Advertising.”