I previously explained how Saint Augustine described the Fall of Lucifer and the demons and related it to Genesis Chapter 1. See video below In this article, I’m asking the question: “Is the Fall of Satan described in Ezekiel 28?” Tertullian, Origen, Jerome, and Augustine interpret the passage as allegorically referring to Lucifer.

Below is the original video on the Fall of Lucifer. Scroll below it to learn more about Ezekiel 28.

In Ezekiel 28, the prophet speaks against the King of Tyre, who was a historical person living in hostility to Yahweh and the people of Israel. However, the prophecy becomes quiet metaphysical and describes a personage beyond the historic King of Tyre. Tyre is the northern neighbor of historical Israel, see photo below: Here’s the entire passage with my commentary in red (I generally use “Lucifer” to describe him as pre-fallen, non-sinful; and “Satan” to refer to him as fallen and sinful).

11 Moreover the word of the Lord came to me: 12 “Son of man, raise a lamentation over the king of Tyre, and say to him, Thus says the Lord God: 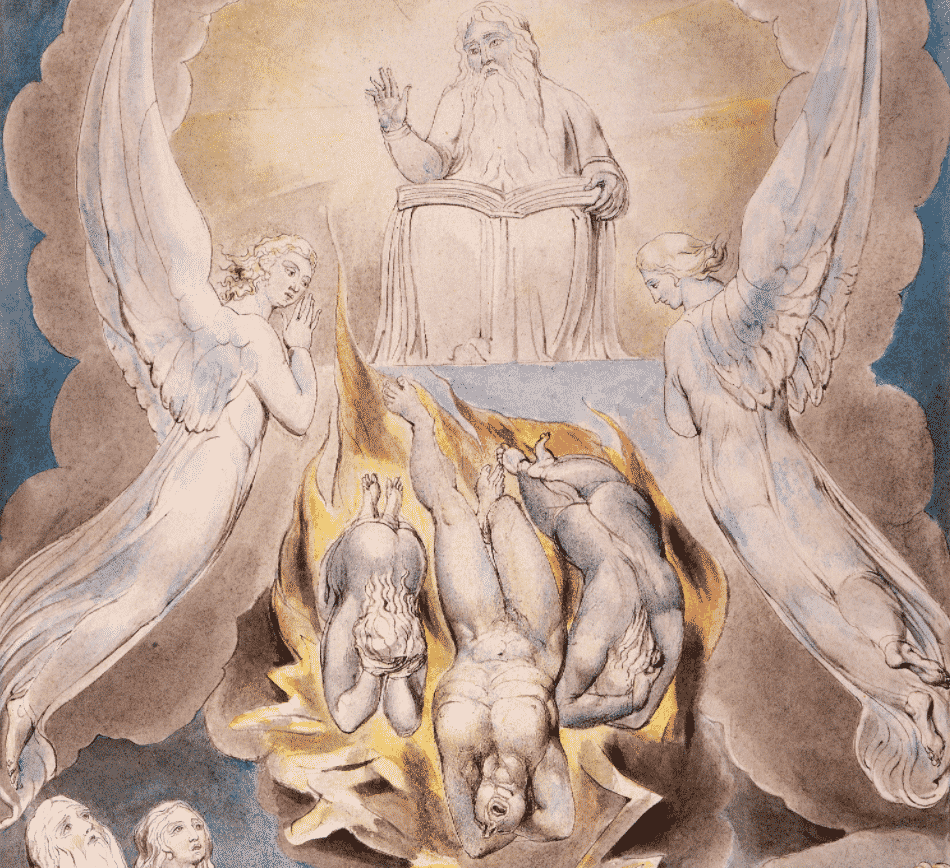 “You were the signet of perfection, [Tertullian interprets “signet” or “seal” as meaning that Lucifer was created in the image of God with perfection – he had the highest created intellect and will]
full of wisdom
and perfect in beauty.
13 You were in Eden, the garden of God; [This is taking us beyond the historical king and back to the garden of Eden.]
every precious stone was your covering,
carnelian, topaz, and jasper, chrysolite, beryl, and onyx, sapphire, carbuncle, and emerald; and wrought in gold were your settings and your engravings. [The wearing of jewels was an honor of the High Priest of Israel. This language depicts Lucifer as originally a High Priest ministering before the presence of God.]
On the day that you were created they were prepared. [Lucifer was created in time and as good]

14 With an anointed guardian cherub I placed you; [Commentators debate this because the Seraph, not the Cherub, is the highest kind of angel. And yet here Lucifer the highest angel is called a second-tier “cherub.” It may be that angels like, priests “contain” the lower orders within them. For example, every priest is also a deacon and every bishop is also a priest and deacon, etc.]
you were on the holy mountain of God; [This reminds us that Eden is a mountain. It’s a high place like a temple or pyramid.]
in the midst of the stones of fire you walked. [Eden or the Holy Moutain is fiery because of the love of God. “Seraph” means “burning one.”.]

15 You were blameless in your ways [This places Lucifer as sinless in the Garden of Eden. This points to Eden being something beyond a historical and geographical place on planet earth.]
from the day you were created, [Lucifer was created in time and as good]
till iniquity was found in you. [Here he falls in the sin of pride. He becomes Satan.]
16 In the abundance of your trade
you were filled with violence, and you sinned;
so I cast you as a profane thing from the mountain of God, [Satan is profane and cast away from the Mountain that is Eden]
and the guardian cherub drove you out [this may refer to Saint Michael, see video]
from the midst of the stones of fire. [again the holy Eden/Mountain is on fire]
17 Your heart was proud because of your beauty; [pride was his sin]
you corrupted your wisdom for the sake of your splendor.
I cast you to the ground; [this seems to refer to Satan being cast to planet earth]
I exposed you before kings, to feast their eyes on you. [If we are still observing the fall of Satan, then “kings” here refers to the angelic hosts who witness God’s judgment against him.]
18 By the multitude of your iniquities,
in the unrighteousness of your trade
you profaned your sanctuaries; [His “sanctuaries” may refer to angels that were below him and in his charge – the third of angels that fell with him when God “separated the dark from the light”.]
so I brought forth fire from the midst of you;
it consumed you,
and I turned you to ashes upon the earth [Satan is no longer beautiful but scorched and ashen]
in the sight of all who saw you.
19 All who know you among the peoples
are appalled at you;
you have come to a dreadful end
and shall be no more for ever.” [An eternal condemnation for Satan.]

As you move through the passage, it is difficult to see how it might apply to the historical King of Tyre. He did not live in Eden or on a burning Holy Mountain. He was not cast out by God and scorched with fire and made ugly. So how then would it apply to the King of Tyre?

It is likely that the King of Tyre is singled out as being Satan-like because of his historical association with Solomon’s Temple in Jerusalem. King Hiram of Tyre made an alliance with Solomon (Solomon was a Messianic “Son of David”, which I’ve discussed here and relating it to Saint Joseph). And King Hiram provided architects, worders, cedar, and gold for the construction of the Temple in Jerusalem.

Regardless, the Ezekiel 28 is the locus classicus on the fall of Lucifer.

Sacred Heart of Jesus, have mercy on us,

Categories: History, Old Testament, Revelation, Scripture
Disclosure of Material Connection: Some of the links in the post above are “affiliate links.” This means if you click on the link and purchase the item, I will receive an affiliate commission. Regardless, I only recommend products or services I use personally and believe will add value to my readers. I am disclosing this in accordance with the Federal Trade Commission’s 16 CFR, Part 255: “Guides Concerning the Use of Endorsements and Testimonials in Advertising.”