Your grandparents have memories of getting their knuckles rapped by nuns such as Sister Theodora and Sister Dolores. We tradition-minded (younger) Catholics look back with reverent nostalgia. So many beautiful nuns in glorious habits that bordered on the glamorous: 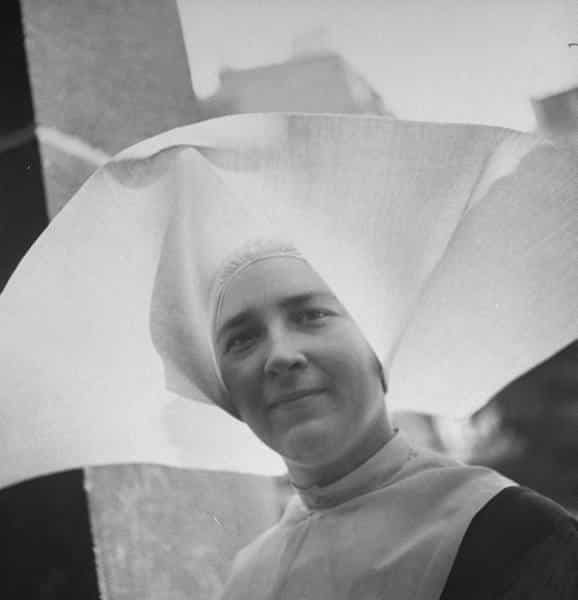 Nuns in habits are like visible leaven for society. They lift it up.

But, as we know, it came crashing down in the 1960s. The world began to see this instead: A new film titled Novitiate seeks to explore (in an insidiously Hollywood way) this shift from the 1950s self-flagellating wimple nuns to the 1960s hippie V2 nuns. Here’s the trailer:

I’m sure the film will be a theological disaster, but it touches on something questionable. If the 1950s convent was a spiritual Shangri-La, why did half the nuns leave and why did the remaining majority pick up acoustic guitars and cheer on the white-washing of their convents and churches?

Here’s my theory: The 1950s nuns were being asked to transform their monastic vocation into “outside the convent Activism” and it obscured their vocation. And yes, I’m especially (and controversially) referring to their ubiquitous role as school teachers.

So yes, habited nuns staffing Catholic private schools (for free) would be awesome. I’m sure every layman (especially wage-earning fathers) and every bishop in the 1940s thought this was a brilliant idea.

Yet as a student of Catholic Church History, I have to admit that “nuns teaching children” just isn’t a traditional model of female religious life. Historically, nuns prayed the Liturgy of the Hours, fasted, prayed, and labored: crops, beehives, baskets, weaving lace and fabric, etc. One can hardly imagine the Desert Mothers teaching school. Similarly, in the Eastern Christian tradition, you do not observe consecrated nuns leaving their cells to open up grammar schools.

And speaking of children and education, consider your Catholic mother today. These mothers have anywhere from 12 to 1 children at home. Some homeschool their children, because the public school situation is not consonant with their values and educational goals. These mothers are exhausted.

Now consider the nuns of 1950. They were overseeing and teaching and feeding and cleaning up after 30+ kids per day. These were not their own children. I’m sure these kids were cute, but that wears off after awhile.

At 6pm, a husband doesn’t open the garage door and give her a hug and kiss and say, “Wow, dinner smells great.” She doesn’t have the comfort of sexual intimacy or the hope of seeing her children bear grandchildren and attend to her in old age. Almost all the kids in the convent schools will move on and go away.

It’s a very difficult vocation. I have no doubt that God has this vocation for special women. Teaching orders have been, are, and will be part of the Catholic Church.

But a gargantuan problem had already entered the female orders. Some have said that young women entered orders in order to pursue studies and work that society would not yet allow them to do. Once that began to change in the 1960s and 1970s, they left.

A further problem is that the nunneries were no longer centers of monasticism. Teaching kids for no pay isn’t too fun, I imagine. The only thing to keep you on task would be monastic commitment. And monasticism was already slipping away.

These convents very rapidly exchanged the outward norms of Catholic devotion for Freudian psychology and new age spirituality. Why? The monastic element was not there. Teaching was had become a form of activism.

“I want to join a convent and teach mathematics and the catechism to cute children.”

Is that a vocation to the religious life? Which is prior? This is who I want to be? This is what I want to do?

I imagine that I may get flamed in the comments section for even suggesting that pre-Vatican II religious life was not healthy. Perhaps I’m wrong, but if you think so, provide evidence. And to all the faithful sisters who have persevered through things that we could never comprehend, thank you and may Christ reward you.

I recall meeting an 80 year old nun in a convent full of nuns that wore street cloths and went by their civilian names. I remember her name as Sister Dolores. She spoke clearly and devoutly about Christ her Spouse. She was full of faith – and I could tell that she had endured suffering. There are jewels out there. I’m not question that obvious fact. I’m questioning the “out of the convent” activism that obscured the identity of women religious in the 20th century.

Question: I look forward to your thoughts and comments. I’d especially like to hear about the experience of those who were children in these schools. You can leave a comment by clicking here.

Category: History
Disclosure of Material Connection: Some of the links in the post above are “affiliate links.” This means if you click on the link and purchase the item, I will receive an affiliate commission. Regardless, I only recommend products or services I use personally and believe will add value to my readers. I am disclosing this in accordance with the Federal Trade Commission’s 16 CFR, Part 255: “Guides Concerning the Use of Endorsements and Testimonials in Advertising.”