On planet earth there are about 70 million Orthodox Christians that are not in full communion with the Catholic Church (centered at Rome) or with the Eastern Orthodox (centered at Constantinople). These are the Oriental Orthodox Christians. They have all seven sacraments, revere the Mother of God and the saints, have a valid Eucharist, pray for the faithful departed, and have preserved a valid line of apostolic succession. 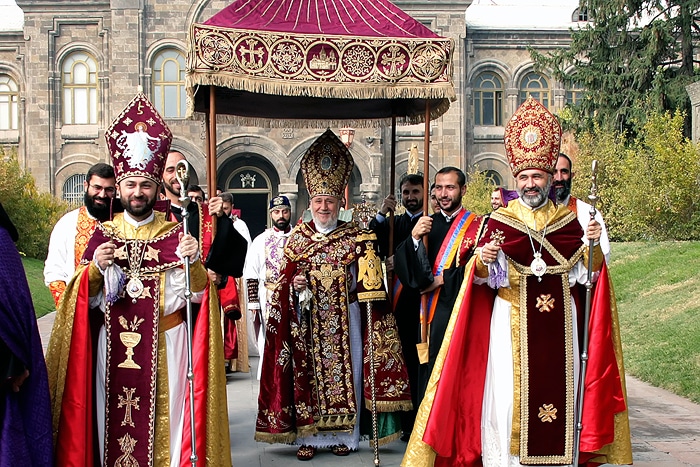 Armenian Christians in the Miaphysite Tradition

These Oriental Orthodox Christians do not accept the Council of Chalcedon in AD 451 which dogmatically defined that Christ is one divine Person with two natures (divine and human).

The Non-Chalcedonian Oriental Orthodox Christians rejected this Council because Saint Cyril of Alexandria spoke of one nature (Greek: mia physis) in the incarnate Christ. These Non-Chalcedonian Christians rejected the Council of Chalcedon on grounds that a great saint and doctor of the Church, Saint Cyril, spoke of “one nature” or “mia physis.” According to them, how then could the Council teach “two natures”? An Ethiopian Orthodox monk at prayer

The Non-Chalcedonian “Miaphysite” Christian Churches are the:

The Oriental Orthodox Communion of Churches

This communion of Oriental Orthodox Churches are called by the following terms:

The Big Debate Over Ek or En “Two Natures”

The big debate between Non-Chalcedonian Miaphysites on one hand, and Chalcedonian Catholics and Eastern Orthodox on the other, centers on the use of terms in Greek:

Pope Saint John Paul II signed accords with the Coptic Orthodox and the Syriac Orthodox (both miaphysite) recognizing that their Christology is currently sound and orthodox – fully in accord with Roman Catholic Christology. The Catholic Church recognizes that the debate was essentially linguistic and political and it’s worth noting that ALL the miaphysite churches belong to the Eastern Provinces of Byzantium and were non-Greek speaking nations. Hence, there is little separating the Oriental Orthodox from joining into full communion with the Successor of Saint Peter in Rome.

With the recent martyrdom of the 21 Coptic Martyrs and persecution of Syrian Christians, let’s pray for a reunion of all followers of Our Lord Jesus Christ in the Holy Eucharist.

I put together a free worksheet about Coptic Christians which you can download here:

Categories: Church Fathers, Liturgy, Saints, Scripture, Tradition
Disclosure of Material Connection: Some of the links in the post above are “affiliate links.” This means if you click on the link and purchase the item, I will receive an affiliate commission. Regardless, I only recommend products or services I use personally and believe will add value to my readers. I am disclosing this in accordance with the Federal Trade Commission’s 16 CFR, Part 255: “Guides Concerning the Use of Endorsements and Testimonials in Advertising.”