If you have a radio in your car, you have probably heard the popular song “Take Me to Church” by Irish recording artist Hozier. For those who don’t listen to the radio or care about pop music, all you need to know is that this song was nominated for Song of the Year at the Grammy’s. 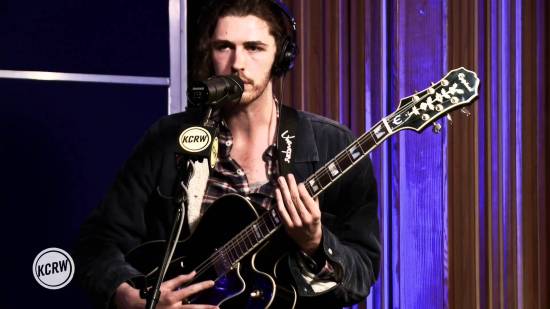 The song is hauntingly beautiful with subtle verses and a soulful chorus. Admittedly, when I first heard it, I thought, “Wow, this is a powerful song. It’s almost hymn-like.” It’s Elton John mixed with an old Southern Spiritual from the American Civil War.

But then I started listening to the lyrics…

“Take Me to Church” by Hozier could only have been written by an Irishmen with Catholic roots. When he sings of “Church,” it is a “sacrifice” at a “shrine” with a “ritual” and includes “I’ll tell you my sins.”

However, Hozier’s religion is not Protestant or Evangelical Christianity. This is Irish Catholicism with a blasphemous twist…

Take Me to Church Lyrics Analyzed

Regrettably, the lyrics to “Take Me to Church” are pretty blasphemous. Here’s my theological analysis with my commentary in the red:

[Verse 1]
My lover’s got humour
She’s the giggle at a funeral
Knows everybody’s disapproval
I should’ve worshipped her sooner (So this is the cue. The God throughout the song is a girlfriend.)
If the Heavens ever did speak (“If the Heavens ever” = revealed religion is cast into doubt)
She’s the last true mouthpiece
Every Sunday’s getting more bleak
A fresh poison each week
“We were born sick”, you heard them say it (“they” [Catholics] teach original sin)
My church offers no absolutes (So unlike Catholicism, there are no moral absolutes – only relativism)
She tells me “worship in the bedroom” (the liturgy is sex. It’s the place of union between him and the “god”/girlfriend)
The only heaven I’ll be sent to
Is when I’m alone with you
I was born sick, but I love it (acknowledges original sin – but he loves it)
Command me to be well (a reference to Christ commanding people to be well in the Gospels)

[Chorus] (x2)
Take me to church (remember, “Church” here is sexual reference in this song)
I’ll worship like a dog at the shrine of your lies
I’ll tell you my sins so you can sharpen your knife (confession reference)
Offer me my deathless death
Good God, let me give you my life (he hands over his life to her the “god”)

[Verse 2]
If I’m a pagan of the good times
My lover’s the sunlight
To keep the Goddess on my side (the god/girlfriend is also a goddess)
She demands a sacrifice (here’s where the song gets “Eucharistic” with reference to sacrificial meal and hunger…)
Drain the whole sea
Get something shiny
Something meaty for the main course
That’s a fine looking high horse
What you got in the stable? (reference to the Christ Child “in the stable”)
We’ve a lot of starving faithful
That looks tasty
That looks plenty
This is hungry work

[Bridge]
No masters or kings when the ritual begins (egalitarian ritual – sex)
There is no sweeter innocence than our gentle sin (hey, at least he knows it’s sin – he’s Irish!)
In the madness and soil of that sad earthly scene (a reference perhaps to leaving earth into the “heavenly bliss” of sexual embrace)
Only then I am human
Only then I am clean (he ends with a reference the sexual completion as a kind of baptism or absolution)

Take Me to Church Meaning

What’s amazing about his song is that it’s about as offensive as anything produced by Marilyn Manson, Judas Priest, or Slayer – yet hardly anyone recognizes it! It takes rich Catholic sacramental language but re-signifies the imagery as a sexual encounter. And that’s the so-called “genius” of this song.

The music industry is now much smarter than it was in the days of Judas Priest, Black Sabbath, and Slayer. Your daughter is not likely to love Marilyn Manson and erect an idol to Satan in her bedroom. Your son will not likely consecrate his baby to Lucifer and baptize him in goat’s blood.

Overt Satanism is out of style. However, young people are likely to exchange their Christian faith for sexual license. The stats show that young people will likely exchange the sacramental life and liturgy for the liturgy of sexual experimentation.

And that’s exactly why this song has become an American anthem. The devil doesn’t needs a league of heavy metal Satanists. He’d almost prefer to have people mocking the Christian sacraments and images.

If God isn’t real – “If the Heavens ever did speak” – then the only goods to be enjoyed in this life are the pleasures of food and sex. That’s all there is left for humans to experience transcendence. Hozier gets it and he sings for us a catchy hymn.

In an interview with New York Magazine in March 2014, the artist Hozier stated:

‘Take Me to Church’ is essentially about sex, but it’s a tongue-in-cheek attack at organizations that would… undermine humanity by successfully teaching shame about sexual orientation — that it is sinful, or that it offends God… But it’s not an attack on faith… it’s an assertion of self, reclaiming humanity back for something that is the most natural and worthwhile.

So there you have it from Hozier himself.

I know it’s a catchy song. There’s a part of me that likes it. But seriously, this is probably one of the most sacramental songs every popularized – and it sacramentalizes the wrong values. That’s my two cents. Godspeed, Taylor

Download a pdf Study Guide by Taylor of the Lyrics for “Take Me to Church”:

Question: Okay, now I want to hear from you. Do you agree? Did I miss something about this song? You can leave a comment by clicking here.