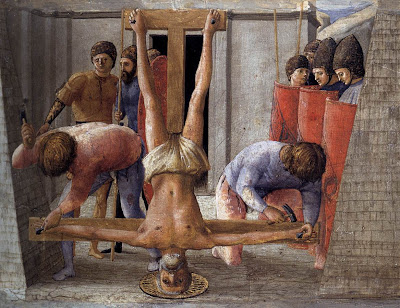 St Peter crucified upside down in Rome
Most Protestant scholars contest that Catholic claim that Saint Peter was the first bishop (pope) of Rome. They go so far as to say that Peter never even visited Rome.
As we prepare to celebrate the feast of Saint Peter and Saint Paul (June 29), we should take a look at this objection.
I argue that there is plenty of evidence of Peter’s presence not only in tradition, but also in Sacred Scripture.
I refer to the mystery of the “another man” in Saint Paul’s Epistle to the Romans.

[the following is a free selection from my book The Eternal City: Rome and the Origins of Catholicism]

As one reads the thirteenth chapter of Romans, one cannot help but see a concern in Paul’s mind about the tenuous state of the Roman Church in relationship to Imperial Rome. Once already the emperor had exiled all Jews from the city on account of “Chrestus” – a Roman mispronunciation of “Christus.” Perhaps Paul was worried that the current emperor Nero Caesar might hear rumors that “Chrestus” was once again stirring up rebellion in the imperial city—this time not only among the Jews but also among the non-Jews. Paul therefore exhorts the Roman Christians to “be subject to the governing authorities,” and to honor the Roman Caesar in things pertaining to civic duties (Rom 13:3-7).
It may seem rather odd that Paul does not mention Peter’s name in his Epistle to the Romans. Protestant scholars are quick to use Peter’s absence in the Epistle to prove Peter’s absence in Rome, with an argument such as this: “If Peter had practiced his apostolic ministry in Rome, Paul would have referred to it. Since Paul did not mention Peter’s apostolic ministry in Rome, it must be the case that Peter had not been in Rome.”
Contrary to this claim let me affirm that Paul did in fact refer to Peter in his Epistle to the Romans though not by name. This should not come as a surprise to us because Paul elsewhere avoids the proper names of important people. This is the “principle of anonymity”. The New Testament authors show a general reluctance to name names concerning certain subjects.

The general pattern found in the New Testament is that if anything relates to the Roman Empire, do not be specific. This was a way to protect the Church from imperial persecution. Thus Rome is referred to as “Babylon” and “another place” and “the Beast”. For example, in his Epistle to the Romans, the Apostle refers to Nero Caesar a number of times, but not once does he refer to Nero by name. Paul refers to Nero repeatedly as an “authority”, “ruler”, “servant of God”, and even as a “minister” (Rom 13:2-6). Anyone who knows the diabolical character of Nero, may be surprised by these flattering titles, but there is no doubt that Paul speaks of the current emperor of his day—Nero Caesar.
In a similar fashion, Paul refers to Peter as the mysterious and apostolic “other man” of the Church of Rome. Paul states that “another man” has already laid the foundation of the Church of Rome. Paul further explains why he has not yet come to Rome: “I make it my ambition to preach the gospel, not where Christ has already been named, lest I build on the foundation of another man” (Rom 15:20-21). The implication is that Paul has no need to come to Rome because “another man” has already built the foundation of the Church in Rome.

The sufficiency of this other man’s Apostleship is manifest by Paul’s doctrine that the Apostles are the only men capable of laying the foundation of the Church in Christ (Gal 1:11-24). Thus, Paul had no desire to establish the Church in Rome because he saw the Church of Rome as perfectly established by “another man” with Apostolic credentials.
Tradition identifies this “other man” as none other than Peter himself. This would explain the rather obscure reason given by Paul for his being “hindered very much” from coming to Rome (Rom 15:22). Paul was aware of his controversial status in the Church. If the Jews of Rome were rioting because of Peter, Paul would have driven them into hysteria! It would not have been appropriate for Paul to go to Rome. Paul’s affirmation that Rome is fully established under Apostolic authority is seen in his desire merely “to pass through” Rome and “enjoy your company for a little” as he travels to Spain (Rom 15:24).

Do you want to learn more about the little known historical and theological claims of the Catholic Church about Rome?

Please check out my brand new book The Eternal City: Rome & the Origins of Catholicism at amazon.com by clicking here.