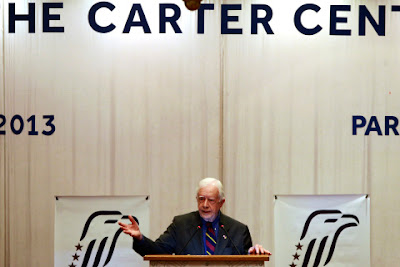 President Carter seems very concerned about the Catholic doctrine of the male priesthood. Speaking at the Carter Center’s “Mobilizing Faith for Women” the former President answered some questions about women and religion. Let’s look at his words against the Catholic Church and then I’ll provide three systematic responses:

“And I think the great religions have set the example for that, by ordaining, in effect, that women are not equal to men in the eyes of God. This has been done and still is done by the Catholic Church ever since the third century, when the Catholic Church ordained that a woman cannot be a priest for instance but a man can. A woman can be a nurse or a teacher but she can’t be a priest. This is wrong, I think.

And again, President Carter says: “And then after about the third century when men took over control of the Catholic Church, then they began to ordain that women had to play an inferior position, not be a priest.”

Now I can understand where President Carter is coming from. First, he and his wife are Baptists. As Baptists they do not believe in a sacerdotal doctrine of the priesthood.
Unlike the Baptists, the Catholic Church believes that the priesthood is not merely a ministerial function or office. Rather, when a man is ordained a priest, he is configured to Christ in a special way. His soul changes. We call this the indelible seal or character of Holy Orders. This is why there have never been women priests in the Catholic Church – not in the third, second, or first century. Never.
1. Jimmy Carter, Let’s Take a Look at the Mystery of the Transubstantiation
Not only does the priest’s soul undergo a metaphysical change, but the priest loans his own body and voice to Christ when he recites in the Holy Mass “This is my body.” This act transubstantiates bread into the true Body of Christ.
Let’s pause here. This is my body. Human bodies come in two versions: male and female. God designed it this way. Both sexes image God because, as the Church teaches, both sexes are ensouled and rational. See Genesis for details.
However, when the priest says, “This is my body,” he is acting in persona Christi (in the person of Christ). Now then Christ is male. He was circumcised. The body that He offered on the cross was male. For this reason, only men can be priests because the Catholic Church mystically identifies the male Body of Christ with each and every male priest. The sacramental signification requires a man to stand in for the God-Man Jesus Christ at the altar.
2. Jimmy Carter and Clericalism
Secondly, President Carter unknowingly slips into clericalism. Clericalism is the insidious belief that clergy are de facto holier and more important than everyone else. As a Baptist, he likely sees his pastor as a CEO and/or a gifted public speaker. These functions parallel those of secular companies. Hence, to exclude women is, in his mind, sexist.
But the Catholic Church does not see priests as CEOs or primarily as preachers/teachers. Rather, priests are chiefly “fathers.” Their relationship to other people is not transactional, it’s paternal. Only a dad can be a dad. Again, it’s a male thing. The Aramaic word for “father” is Abba meaning “giver of love.”
3. Jimmy Carter, please meet the Blessed Virgin Mary
Here’s the third and final thought:
I’d like to point out that the Catholic Church explicitly teaches that the greatest human person ever created is the Blessed Virgin Mary. 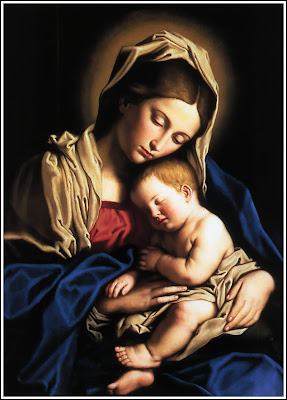 At the end of the day, the Catholic Church teaches that it is holiness and intimacy with Christ that is most important, not being a priest. As a former Episcopal priest, I could go on to be a married Catholic priest. But I chose not to do so. Why? Because I realized that my personal “yes” to God is enough. Nothing more is needed of me.
I love priests. I kiss the hand of every priest I meet. I truly love priests because without them there is no Holy Eucharist and no supernatural life in the world. However, as my former spiritual director Father Ron Gillis (who died just last week) taught me, “At the front of most Catholic churches are not side altars dedicated to Peter and Paul, but to Joseph and Mary – a reminder that the priesthood supports the Church and not the other way around.”
That’s a beautiful and simple lesson for all of us.
May Father Ron Gillis rest in peace. It’s too bad that he could not have shared that insight with President Jimmy Carter.
Fr Ron Gillis, rest in peace. Please say a Hail Mary for the repose of his soul.
Do you enjoy reading these posts by Dr. Taylor Marshall? Make it easier to receive  new daily posts. Receive these blog posts through email free by clicking here.
Privacy Guarantee: Your e-mail will never be shared with anyone.

Categories: Liturgy, Mary
Disclosure of Material Connection: Some of the links in the post above are “affiliate links.” This means if you click on the link and purchase the item, I will receive an affiliate commission. Regardless, I only recommend products or services I use personally and believe will add value to my readers. I am disclosing this in accordance with the Federal Trade Commission’s 16 CFR, Part 255: “Guides Concerning the Use of Endorsements and Testimonials in Advertising.”

Parts of the Latin Mass by Dr. Taylor Marshall

Sacred Vessels of the Latin Mass by Dr. Taylor Marshall