We are getting thousands of emails from all over the world. By God’s grace, the Troops of Saint George will launch on time by the end of the summer! 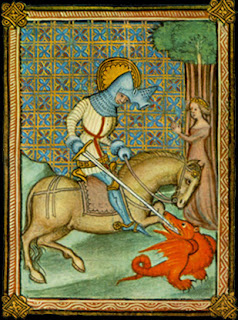 These emails express excitement from young men and parents. However, its becoming apparent, that the Troops of Saint George (TSG) isn’t for everyone.

I want to be 100% transparent about what the Troops of Saint George is and what it is not. I do not want anyone to spend their efforts with us only to be disappointed.

We have a very specific mission and goal: that Catholic men and boys will become saints in their love for our Lord Jesus Christ.

Here are 6 reasons why the Troops of Saint George isn’t for everyone:

1) This is a Catholic movement. Please understand that the TSG is for Catholic men and Catholic boys. There are a number of reasons for this exclusivity:

a) The TSG will include activities expressly Catholic (Mass, Rosary, Marian hymns, pilgrimages to Guadalupe/Fatima/Rome, prayers to Saint George, etc). It’s not fair to ask non-Catholics to act contrary to their religious beliefs.

Image this! Think about forty boys and a few dads sitting around a campfire at 10:45pm with the sky full of stars. They just spent a long and exhausting day hiking and practicing survival techniques. The sky is full of constellations. The Milky Way is spread out above them. The boys just finished telling camp fire stories and performing a few skits. The dads cooked peach cobbler for the boys in their cast-iron dutch ovens. When they finish their hot cobbler, the boys take turns leading the Rosary and finish by chanting the Salve Regina to Mary in Latin. If that doesn’t excite you, then the TSG is probably not for you.

If this sounds like a  dream come true, then join the team and start a troop.

b) Membership and leadership standards will include recommendations from a Catholic priest in good standing and safe-environment classes from the local diocese.

d) What if we allowed non-Catholics? What if a Troop became 51% Protestant and voted to have a Calvinist chaplain instead of a Catholic priest? Then what? Are any Catholics going to join it? The TSG in that town has abandoned its birthright.

“But what about witnessing to other non-Catholic boys? We cannot leave them out in the rain!” I certainly feel this objection in my heart. I was a non-Catholic boy scout and I do know that Catholic boys had an influence on me. Trust me. I understand. However, if we are going to avoid the mistakes of the BSA, we are going to have to make a stand on this. We must be on the same page when it comes to moral issues. Which leads to…

2) We have high moral standards. The TSG are called to high standards. Alcoholism, adultery, fornication, and any other transgressions against the doctrinal or moral teaching of the Catholic Church will not be tolerated in the adult leaders or with the boys. The TSG should be exemplars of virtue in their community.

3) This is a men’s movement. A lot of people have taken exception to this. “The Troops of Saint George is as much about Catholic men as it is about Catholic boys.” I’ve placed this quote in bold because that sound bite should be repeated whenever anyone talks about the TSG.

Visit your local Catholic parish and you’ll see that men have generally abandoned its leadership. This is true with attendance and volunteer work. The published stats are readily available. We need a renewal in Catholic manhood. We start with the men and their boys. We begin to start a revolution where fathers and sons are not embarrassed to pray the Rosary together.

Can mother’s help out and be involved in a number of ways? Of course! We need the mothers! Wives are integral to the spiritual formation of their husbands and their sons. Our wonderful mothers are not to be excluded. However, the leadership and camping activities are for men and boys only. Boys become men through the mentorship of other men. The Blessed Virgin Mary was without sin, all holy, all wise, and the most perfect creature of all. Yet God still placed Saint Joseph into Christ’s life. Mary facilitated. However, Mary did not teach Jesus how to carve wood. She left that to Joseph.

4) We are not co-ed. Young men and women need each other, but they also need to have times apart. I’ve been a high school teacher. I am a college professor. I am a father. Take it from me: Boys act and think differently when girls are around. They don’t ask questions. They play it cool. They are more self-aware. They are less aware of their friends and more aware of the girls. That’s not bad. That’s just the way things are. Why fight nature?

Boys (and men) need to get away and get into the woods and sit around the fire. I believe that down to the core of my bones. Is your husband stressed out? Send him out into the woods. He’ll come back a happier man.

Will we start a “Troops of Saint Joan of Arc” at some point? We are considering it. Right now, there is more demand for TSG and we are overwhelmed. I don’t know much about girl outdoor movements. We would need women to help take up the torch in this regard. I’m open to it.

5) We are not a “boy’s club.” The Knight of Columbus Squires and other great boys groups are wonderful. We promote and support them. However, the Troops of Saint George is different. It’s an outdoors movement. It entails rappelling, knots, camping, backpacking, survival, dutch oven cooking, fishing, etc.

Camping and doing survival weekends isn’t for everyone. We are not chiefly concerned about community service. We encourage that, but that’s not the point of TSG. We want a boy to come home and proudly tell his mother that he now knows how to rig a small sail boat. We want a boy to have that moment of self-confidence burned into his memory.

6) We have high-standards. This point comes from Baden-Powell. He understood that boys don’t want to be boys. Boys want to be men. Inner city gangs understand this. Unfortunately, many good people do not understand this reality with boys. The TSG isn’t going to be an easy “check the box” organization. The ranks will be earned and the boys will know their faith and have character. We expect that many these young men will go on to be the heroic priests of the next generation.

The Troops of Saint George, to distill the idea, is asking boys to achieve manhood. We are modeling ourselves on chivalry and the art of being a gentlemen. We aren’t going to tolerate backward baseball caps, shirt tails out, and white basketball shoes with the uniform. Yes, it’s going to be a little bit old fashioned. The handbooks, uniforms, badges, hats, neckerchiefs, and everything associated is going to be of higher quality than the BSA. When you see it, you will say, “Wow!” When non-Catholics see it, they will say, “I wish I were Catholic! That looks so cool!

Your sons will look like men because we want them to become men. Baden-Powell always stressed the importance of self-respect and public appearance, and we should not forget it. There is nothing Catholic about looking like a slob. From the chivalric orders, to the religious orders, to the diocesan priesthood, the Catholic Church has always insisted on proper dress. The Troops of Saint George should see themselves in that tradition.

I imagine that a few will read these six points above and think, “Shucks. I’m out. This isn’t for me. This isn’t for my family.” That’s okay. It’s better for all of us to realize this at the beginning rather than two years into it.

If anyone wants to fight over these 6 points of identity for the TSG, please don’t. These six principles are not up for debate. They are part of the core identity of the Troops of Saint George. There are other boys clubs and organizations out there. I’m sure you can find a fit.

Now I turn my eyes to those who have read these six points and are fired up. Do you want be that father sitting around the camp fire praying the Rosary and looking up at the stars? Do you want a Catholic mens/boys movement that seeks to transform the culture and restore genuine manhood? If so, please start a troop in your town. Man up and take the lead. Let’s work together.

On our death beds, we will be glad and grateful that we did this…

CALL TO ACTION: We will begin the registration of the first 100 TSG Troops on July 1, 2013. These first 100 Troops will be “Charter Troops” and will retain special badges and honor in perpetuity as the original “100 Charter Troops of the TSG.”

In order to Charter a Troop you need: