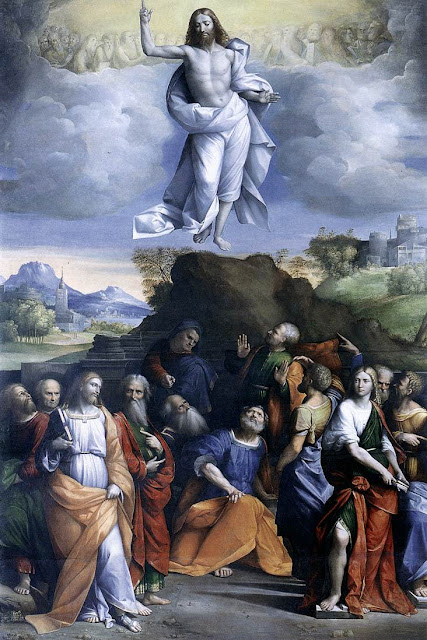 Catholics sometimes make the claim that while Christ “ascended” into Heaven, our Blessed Mother was “assumed” into Heaven. The difference, they say, is that Christ ascended by His own divine power; but that Mary was raised by the power of God. The apologist using this argument usually seeks to show Protestant objectors that Mary’s assumption is categorically different than Christ’s ascension.
Such an argument is fundamentally correct and in accordance with orthodox theology, but the vocabulary isn’t correct. As a result the argument can be a little confusing.
The Language of Ascension and Assumption
The Greek and Latin used in the Gospels (and Acts) employ terminology of “assumption” for the ascension of Christ. First let us examine three verses that describe Our Lord’s ascension in terms of assumption, and then describe the theological significance.
“Et Dominus quidem Jesus postquam locutus est eis, assumptus est in cælum (He was assumed into Heaven), et sedet a dextris Dei.” (Mark 16:19, VGCLEM)
“usque in diem qua præcipiens Apostolis per Spiritum Sanctum, quos elegit, assumptus est (He was assumed)” (Acts 1:2, VGCLEM)
“qui et dixerunt : Viri Galilæi, quid statis aspicientes in cælum ? Hic Jesus, qui assumptus est (Who was assumed) a vobis in cælum, sic veniet quemadmodum vidistis eum euntem in cælum.” (Acts 1:11, VGCLEM)
For our Greek scholars, the Greek word here in Mark and Acts is the aorist passive form of ἀναλαμβάνω. It corresponds to “taken up” or “assumed.”
The conclusion is that Scripture uses the language of ascension and assumption for Our Lord’s transition into Heaven. (Saint John’s Gospel frequently uses the language of ascension.)
The Theology of Ascension and Assumption
The obvious difference between the terms is that to ascend is active and to be assumed or to be taken up is passive. Ascension denotes an agent going up by his own power. He ascended the mountain. Assumption denotes that an object was moved by an agent. It’s passive. The office was assumed by the soldier.
Now Our Lady’s body did not go to Heaven by its own natural power. Hence, we usually refer to her transition to Heaven as an assumption. Christ actively raised her to His right hand. However, Christ’s bodily transition was both an ascension (active) and an assumption (passive).
With regard to the activity of His divinity, Christ’s body ascended. With regard to humble obedience of His human soul, He was assumed into Heaven.
According to the Sixth Ecumenical Council, Christ possesses two wills – the divine will of the Holy Trinity and His created human will corresponding to His created human soul. When we remind ourselves of this mystery, we can see more clearly how Christ both ascended with divine power and willed to be received and elevated by the Father. Hence, both Saint Mark and Saint Luke use the language of assumptus est to describe the ascension of Christ.
Happy Feast of the Ascension! We have a High Priest in Heaven who intercedes for us from His Sacred Heart at every second of the day.
Question: Have you heard of the “assumption/ascension” distinction before? Do you think it’s a useful apologetical tool? I’d love to hear your experience. Please leave a comment.
Do you enjoy reading these posts by Dr. Taylor Marshall? Make it easier to receive  his new daily posts. It’s FREE.