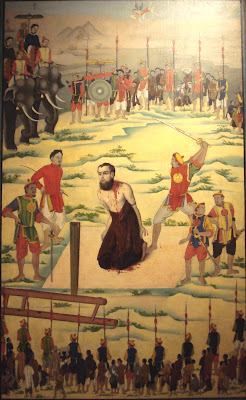 At the Holy Sacrifice of the Mass this past Sunday, Pope Francis canonized 813 Martyrs from the Italian city of Otranto who were beheaded for refusing to become Mohammedans.
“As we venerate the martyrs of Otranto,” proclaimed Pope Francis,” let us ask God to sustain those many Christians who, in these times and in many parts of the world, right now, still suffer violence, and give them the courage and fidelity to respond to evil with good.”
These martyrs of Otranto are our brothers and sisters in Christ. They still love us. They still care for us. Their share in Christ is much more profound than we now experience.

Saint Thomas Aquinas teaches that the martyrs in Heaven receive a special crown or “aureole” when gives them a share in the reign of God.

The aureole is a special halo that only martyrs, consecrated virgins, and ecclesiastical doctors receive in reward for striving against evil. Saint Thomas holds that the aureole is a divine endowment of regal power so that these saints have a special share in the divine power. This idea goes back to the Old Testament, the Apocalypse of Saint John, Saint Augustine, and Saint Bede.

Saint Augustine wrote: “No one, methinks, would dare prefer virginity to martyrdom” (De Sancta Virgin. xlvi). Consequently, says Saint Thomas, an aureole is due to virginity, and also to martyrdom. Thomas also writes:

Further, the crown is due to one who has striven. But in martyrdom the strife presents a special difficulty. Therefore a special aureole is due thereto.

The martyrs then have a special share in the heavenly reign of God. They always have and they always will.

This is a biblical teaching. We read in the Book of Revelation that to the martyrs of Christ are giving a special status in Heaven. They say to Christ: “Thou hast made us a royal race of priests, to serve God; we shall reign as kings over the earth” (Apocalypse 5:10). Moreover, it is given to the martyrs of Christ to dwell beneath the heavenly altar of God on high. They are closely associated with the eternal sacrifice of Christ.

This, by the way, is why the relics of martyrs were placed in Catholic altars in the early Church. Their sacrifice as martyrs was tangibly linked to the infinite sacrifice of Christ on the Eucharistic altar.

Let’s open the comments: Might you be called to be a martyr? How does one train for this honor?

Saint Vincent Ferrar says that those who have not received the sacrament of confirmation will not persevere under the Antichrist. Perhaps, the theology of the sacrament of confirmation needs to be articulated more in terms of soldier/martyr. We often stress the idea of “soldier of Christ” in confirmation but do we emphasize that the greatest soldiers belong to the “army of martyrs,” mentioned in the Te Deum? Perhaps the anointing with chrism on the head signifies the aureole that could be won through martyrdom in witness to the love of Jesus Christ…

Do you enjoy reading these posts by Dr. Taylor Marshall? Make it easier to receive  his new daily posts. It’s FREE.
Receive my daily blog posts through email by clicking here.
Privacy Guarantee: Your e-mail will never be shared with anyone.