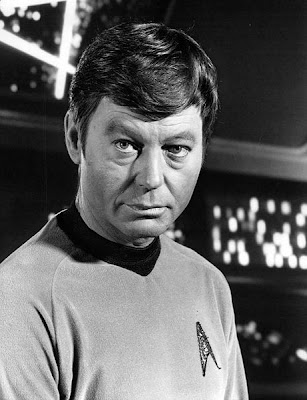 This is your negative inner voice
Dr Bones McCoy is “the Resistance.”
Yesterday I spent some time with Catholic author and speaker Brandon Vogt. Brandon Vogt is a lynchpin in Catholic social media. We’re both big fans of Seth Godin and the concept of being a “generous author.” That means giving away your work even when it doesn’t profit (Click here for details) . It’s more about loving your readers and have a relationship with them than it is about the dollars and dimes.

As Brandon and I were driving around talking about this idea, he recommended a book for me to read:

The War of Art: Break Through the Blocks and Win Your Inner Creative Battles by Steven Pressfield
I purchased the audio version and I started listening to it. True, Pressfield isn’t a Catholic author but he does have a firm grasp on the philosophy of human nature.
Pressfield speaks of the “the Resistance.” Seth Godin calls it the “Lizard Brain.” It’s that force within you that tells you to stop doing what’s important. Call it writer’s block, fear, or procrastination. I like his term “the Resistance,” although “Lizard Brain” is more memorable. Lizards only want to hang out in the sun and avoid danger. That’s the part of your brain that wants to do the same. The “Resistance” is the same idea.
If you’re trying to write a novel and you check your email twelve times instead, that’s “the Resistance.” If you’re trying to build something huge and life-changing for you and others, but you’re afraid to launch it or assemble a team, that’s “the Resistance.”
Let’s break in down with an easy analogy.
If you’re a Star Trek fan, Captain Kirk is is the concupiscible passions. Spock is the intellect guided by logic. But Dr. Leonard Bones McCoy” is “the Resistance.” He is always reminding us of how everything is going to fail. He’s negative. He’s pessimistic.
Pressfield goes so far as saying that “the Resistance” is what prevents you from becoming who God wants you to be.
Now, Aristotle and Thomas Aquinas called “the Resistance” a defect in your irascible passions. It’s fear as related to a lack of fortitude or courage. It’s also related to pride. Procrastination or writer’s block is often a fear of people criticizing us or laughing at us. It’s a fear of losing face or losing status.
Pressfield’s book is aptly named “The War of Art,” because creating anything always comes down to fighting a war.
So I began to consider how “the Resistance” or “lack of fortitude” might relate to the War of Faith. We are in a war. In the culture war, we are losing. When it comes to practicing Christianity in public or the defense of human life or matrimony, we’re taking major setbacks. Lizard Brain is in control.
I think it’s because we’re listening to that inner voice of Resistance.

“It’ll never work. I’ll just keep checking my email and Facebook. I have this great idea, but it’ll never work. I can’t succeed because of ______. I’ll just watch another YouTube video. I could never be a (priest religious father mother inventor author speaker entrepreneur leader teacher professor, or ________ fill in the blank.”

Overcoming the Resistance is like a entering into a cold pool or a cold shower. The best way to do it is jump into it. Don’t dip your pinkie toe. Jump in. The more you jump in and feel that tremendous shiver and gasping for breath, the more you will acquire the virtue of fortitude. The more courageous you will become and the more heroic you will be in the War of Faith.
We need courageous heroes. We need men and women to jump into the icy water. Dipping our toes and gauging it will get us nowhere. It’s uncomfortable. But that’s where we need to be – where it’s most uncomfortable.
Question: Steven Pressfield says where ever you meet the most Resistance, that’s where you need to be. The Resistance always points true north. What goal do you want to achieve that makes you most uncomfortable? That should be your number one goal. What is that goal? Please share it by leaving a comment.
I’ll be vulnerable with you: My Resistance right now is writing fiction novels and being afraid that people will laugh at me or think I’m not a serious academic for dabbling in fiction. Oh well. I have to pursue it. Time to jump into the icy waters, even Dr. McCoy says that I’ll catch a cold…
Do you enjoy reading these posts by Dr. Taylor Marshall? Make it easier to receive new daily posts. Receive these blog posts through email free by clicking here.
Privacy Guarantee: Your e-mail will never be shared with anyone.

Get Archbishop Vigano's full-text version of his response at https://taylormarshall.com/vigano...
05:34

Pray the Rosary in LATIN with Dr. Marshall! Intro 101: Here's the first video

New Luther Table with Upside-Down Cross in the Vatican! The Hits Don't Stop

Today a Novus Ordo versus populum "Luther Table" was erected...
01:59

Welcome to my Youtube Channel. May you become a faithful...
1/200
Next»