One of my favorite quotes, which I repeat often is the famous line from Saint Irenaeus: “The glory of God is man fully alive.”
Saint Irenaeus lived in the second century and this quote is rightly celebrated as one of the most profound incites into theological anthropology – a five dollar term for the theology of human nature. God receives external glory when humans are truly alive, presumably alive in God.
However, I recently read this article by Father Patrick Henry Reardon (an Antiochian Orthodox priest) that attempts to explain how people naively misuse the quote, “The glory of God is man fully alive.”
Here’s Father Reardon’s article in three bullets:
Father Reardon situates the original quote in context. Saint Irenaeus goes on to say, “the life of a man is the vision of God.” So the context reveals that “living man” or “man fully alive” is in actuality rooted in the beatific vision, that is, Heaven.
However, I wonder if Father Reardon is pushing on this a bit too much! From a Thomistic point of view, there is an analogy between the life of glory in Heaven and the life of grace on earth.
For example, I don’t think we want to say that the Blessed Virgin Mary was not “fully alive” while on earth. True, she wasn’t in Heaven. So in that sense, she was not yet fully alive. Nevertheless, there is an obvious analogy to Heaven and living on earth with the Holy Trinity in your soul. Did the Blessed Virgin Mary, Saint Paul, and the Little Flower demonstrate the “glory of God” while living on earth?
You betcha.
Strictly speaking Father Reardon is right. People do abuse the quote. However, I don’t think that we have restrict the passage to human persons being fully alive in Heaven. God is truly glorified when we live the life of grace here on earth.
Gloria Dei est vivens homo!
Let’s open the comments: Had you heard this quote before? How was it being used? Do you think it can have application in this life?
Do you enjoy reading these posts by Dr. Taylor Marshall? Make it easier to receive new daily posts. It’s FREE. Please click here to receive new daily posts instantly through e-mail. Privacy Guarantee: Your e-mail will never be shared with anyone.
Please check out Dr. Marshall’s new book: The Eternal City available in paperback and Kindle. 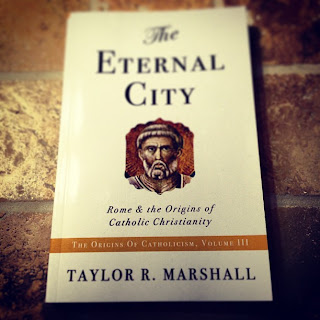 Categories: Mary, Thomas Aquinas
Disclosure of Material Connection: Some of the links in the post above are “affiliate links.” This means if you click on the link and purchase the item, I will receive an affiliate commission. Regardless, I only recommend products or services I use personally and believe will add value to my readers. I am disclosing this in accordance with the Federal Trade Commission’s 16 CFR, Part 255: “Guides Concerning the Use of Endorsements and Testimonials in Advertising.”