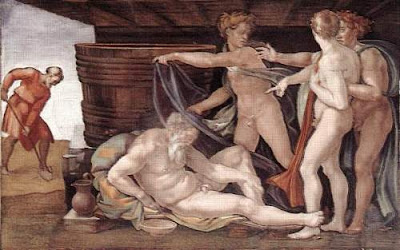 Michelangelo’s Drunkenness of Noah
I grew up in a home in which my parents drank wine at dinner. Occasionally I’d see my dad have a beer. I never saw them get tipsy. Alcohol was a normal part of life and certainly not taboo. It was healthy.
My first experience with alcohol happened when I was about 15 or 16. It happened after I had my wisdom teeth pulled. If you’ve had your wisdom teeth pulled, you know how the surgery can lay you out for a few days. Very painful.
Well, a day or so after the surgery I was hanging out with some high school friends. My mouth, jaw, and cheeks were throbbing with pain. I could feel my heartbeat in the empty sockets of my mouth. The pain was excruciating. I realized that I had forgotten to take my painkillers for the wisdom teeth.
So one of my friends had an idea. He got his dad’s bottle of Jack Daniels and poured me a shot. I imagined myself as one of those wounded cowboys in a Western movie. A swig of alcohol should do the trick, right?
Well, I don’t know how many swigs I had. I remember the music in the background becoming even more interesting and my senses became dull. The next day I was so sick and dehydrated…and the holes where my wisdom teeth had been felt ten times worse. That was the first time I experienced alcohol.
I’m sure that you also can remember the first time we were stung by the fire water. Michelangelo’s painting above from the Sistine chapel memorializes the first time it happened to a human: Noah.
People often ask me about the ethics of alcohol. One time, a Hell’s Angel biker once approached me about it. He wanted to know if “getting drunk” were really a sin.
Saint Paul answers this question clearly: “And be not drunk with wine, wherein is luxury; but be ye filled with the Holy Spirit” (Eph 5:18). Being drunk is certainly a sin.
And then there is the Proverb: “Wine is a mocker and strong drink is a brawler; whoever goes astray by them is not wise” (Prov 21:1).
Saint Thomas Aquinas deals with this topic directly: “To take more meat or drink than is necessary belongs to the vice of gluttony, which is not always a mortal sin: but knowingly to take too much drink to the point of being drunk, is a mortal sin. Hence Augustine says (Confess. x, 31): ‘Drunkenness is far from me: Thou wilt have mercy, that it come not near me. But full feeding sometimes hath crept upon Thy servant'” (Summa theologiae II-II, q. 150, a. 2, ad. 2).
Here we learn that deliberate drunkenness is a grave sin. If somebody spikes a girls drink and she gets drunk, it’s not a sin on her part. If someone sits on the couch and slams six beers to forget his woes. That’s not right.
In this same article, Saint Thomas Aquinas states that Noah did not commit a sin when he became drunk the first time (see Michelangelo’s rendition of the event in image at the top of this post). The reason for this is that Noah was the first human to drink wine, and he did not yet know its effects. He did not seek intoxication with intention. It was an accident.
By the way, the Bible celebrates alcohol. In the Old Testament, “lack of wine” is always a judgment of God against His people (Jer 48:33; Lam 2:12; Hos 2:9; Joel 1:10; Hag 2:16). Yes, you read that right. When the Jews sinned in the Old Testament, God made it so that they lacked grain and wine – two types of the Holy Eucharist. This conforms to the Catholic teaching of “virtuous drinking,” of which I have spoken about at length: here.
Whenever God wanted to bless Israel, He provided an abundance of wine (Gen 27:28; Deut 7:13; 11:14; Joel 2:19, 24; 3:18; Amos 9:13-14, Isa 55:1; Jer 31:12; Zech 9:17).
So alcohol is clearly a God-given blessing. He wants us to enjoy it. He wants us to be merry, in moderation. But he doesn’t want us to drink so as to sacrifice human intellect. We must always keep our wits. To be drunk is to lose what makes us human, our rationality. When we are drunk we become like animals. Senseless and moved by our passions. A dangerous state of being.
Let’s open the comments: It’s my observation that we Catholics have a cultural acceptance for drinking and making merry. However, do we also have a cultural acceptance of drunkenness? Do we really speak and act as if becoming drunk is a mortal sin? I’d love to hear your thoughts on this. Please leave a comment in the field below.
Do you enjoy reading these posts by Dr. Taylor Marshall? Make it easier to receive new daily posts. It’s FREE. Please click here to receive new daily posts instantly through e-mail. Privacy Guarantee: Your e-mail will never be shared with anyone.
Please also explore Taylor’s books about Catholicism at amazon.com.
Comment | Share | Tweet | Buffer | print | email

Did Thomas Aquinas meet the Virgin Mary? plus 3 other Aquinas stories by Dr. Taylor Marshall

Dr. Taylor Marshall shares 4 of his favorite stories about...
53:55

An activist group's projected pro-choice messages on the fascade of...
1/233
Next»