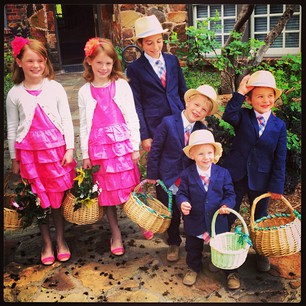 The Marshall Children on Easter Sunday
I’m going to share a somewhat embarrassing story about how I missed Holy Communion on Easter Sunday.
As most of you know already, my family attends the Latin Mass at a parish of the Priestly Fraternity of Saint Peter (FSSP) – Mater Dei Catholic Church in Irving, Texas. It’s a wonderful and beautiful parish. We could not be happier with our priests and friends there.
The Solemn High Mass (with priest, deacon, and subdeacon) was packed on Easter Sunday morning. We have six children so including mom and dad, we need a place that holds 8 people in a row per pew. Now the usher, a friend of mine, was able to squeeze our family into an already tight pew…with the exception of myself who was holding the one year old named Blaise. Joy (who is 8 months pregnant) and the 5 older children were in safely in the pew.
Suddenly, another usher gave me his seat next to his wife since he probably wasn’t ever going to get to sit down on this busiest of Easter Sundays. So our family was divided in Mass. This is key to understanding what happened later.
So I was sitting with the one year old Blaise. He was pretty good at first. As we got the Collect and then the Epistle, I could see that the restlessness was growing within him. We got through the Gospel. We got through the first few minutes of the sermon, and then he does what he always does. Without music or activity in the sanctuary, he begins to compete with Father’s homily. He begins to preach his own baby sermon by making grunts and then delightfully listening to his voice echo throughout the church.
I obeyed my rule: If the little one makes 3 noises in a row or makes a noise that lasts over 3 seconds, we take him out to the narthex or the cry room.
Well, three strikes and we were out. I took Blaise, stopped by the holy water fount and went to the narthex.
He eventually calmed down and we went back in for the consecration. However, after the consecration of the Precious Blood, he was getting loud again. We went outside.
After the Canon was over, my 11 year old son Gabriel appeared. The priests of the parish have a rule about bathrooms. Father, for the sake of protecting young people, says that everyone under 12 has to be accompanied by an adult to the bathroom. So if my 11 year old needs to go to the bathroom, then I have to escort him to the restroom, wait for him and then take him back to the pews.
So I do that.
Then, as I’m walking Gabriel back to the church, one of my 9 year old twins greets me. Guess what? She needs to go to the bathroom, which means that I have to escort her to the bathroom, which I do.
And I wait outside the women’s bathroom for ever and ever in saecula saeculorum. Finally, she comes out and we head back to the church.
As we get the doors, my usher friend says, “Man, are you going to Communion? You had better hurry!”
So I go into the Church. I enter just in time to see the priests returning the to the altar and then place the ciborium in the tabernacle. It’s over. Holy Communion is over. I missed it. My heart sank.
I was so discouraged. I just walked outside and strapped the one year old into his car seat. I got in the front seat and I cried…
All the fasting. All the preparation during Lent. Getting dressed up for Easter Sunday. Getting new outfits for the children on Easter Sunday. All that, and I missed the most important thing on Easter: the Holy Eucharist.
Easter Mass wasn’t a moment of liturgical glory. It was a baby-sitting stunt. It was a time of escorting kids to the bathroom. It’s mundane.
For some reason my mind was stuck on the “foolish virgins” of Saint Matthew’s Gospel who weren’t ready when the Jesus Christ came. They missed their big opportunity:

[10] Now whilst they went to buy, the bridegroom came: and they that were ready, went in with him to the marriage, and the door was shut.

I believe that You
are present in the Most Holy Sacrament.
I love You above all things,
and I desire to receive You into my soul.
Since I cannot at this moment
receive You sacramentally,
come at least spiritually into my heart.
I embrace You as if You were already there and unite myself wholly to You.  Never permit me to be separated from You.
Amen.
After Mass was over, we went home. My heart was not full of Easter joy. I was literally empty.
I was unhappy until I realized that I wasn’t a foolish virgin. Jesus wasn’t punishing me. The door wasn’t closed yet. I’d just go to another Mass and receive Him there. And so I did.
I went to the Cathedral in Fort Worth – the place where I became a Catholic in 2006. I received Our Divine Lord there in the Blessed Sacrament. It was not convenient, but it was wonderful. It was beautiful. It was worth it. Everything is worth it – even the children who have to go to the bathroom and the complications of going to two Masses on Easter Sunday.

Jesus is worth it.

What did I learn? Even when we are doing our “duties,” we need to be eagerly aware of moments of grace.  The window of opportunity for each day may be more limited than we think. If I had been more aware, I could have asked the usher, “Is it almost time for Communion? Do I have time to take her to the bathroom?” I could have told my daughter to hold it for 5 minutes. Instead, I just assumed that the timing would all work out…and I was wrong.
But even if we do miss it, we can always go back to Jesus who is the Divine Mercy. True, when we die, it’s all over. There are no more second chances. But in this life, we can constantly make another run at it.

I could have sat in pity and ruined my own Easter. I could have been bitter about having “all these kids” like George Bailey during his break down in It’s a Wonderful Life (see photo). Or I could just drive to another Mass and do it all over again. It’s a little more work. But it’s worth it.

Jesus is worth it.
Have a great Eastertide!
Godspeed,
Taylor
PS: And of course, the kids are worth it, too!

Blaise, the one year old, is the little guy in the photo.
He enjoyed Easter – just not the Mass part of it.
Now I’ll open up the comments: Have you had a moment like this? Parents especially, do you ever feel like you’re getting gipped during the Mass? It’s hard to juggle kids and pray. How to you understand your vocation to pray and offer intentions as being in “conflict” (for lack of a better word) with your vocation to care for little ones during the liturgy?
Do you enjoy reading these posts by Dr. Taylor Marshall? Make it easier to receive new daily posts. It’s FREE. Please click here to receive new daily posts instantly through e-mail. Privacy Guarantee: Your e-mail will never be shared with anyone.
Please also explore Taylor’s books about Catholicism at amazon.com.
Comment | Share | Tweet | Buffer | print | email