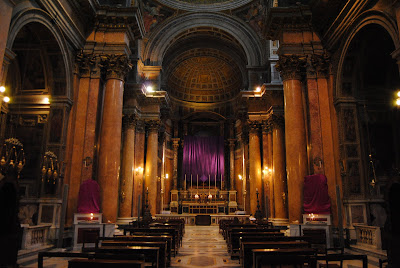 The traditional Catholic custom of veiling images on the 5th Sunday of Lent is making a big come back. The practice lost momentum in the 1970s and 80s, but we’re seeing it make its way back into parish life.

The traditional Gospel reading for this Sunday focuses on the increasing hatred against Christ from the Jewish authorities. They accuse Him of being a Samaritan, committing sorcery, blasphemy, and as being possessed by Satan. They don’t think that Christ is “a good teacher.” They think He is a demonic agent.
The old Gospel reading for Passion Sunday (fifth Sunday of Lent) from the eighth chapter of Saint John’s Gospel ends with these words:

“They took up stones therefore to cast at him. But Jesus hid himself and went out of the temple.” (John 8:59, D-R)

According to Saint Augustine, at this moment when “Jesus hid himself,” Christ in fact became invisible by virtue of His divine nature. Saint Augustine writes:

He hides not Himself in a corner of the temple, as if afraid, or running into a cottage, or turning aside behind a wall or column: but by His Divine Power making Himself invisible, He passed through their midst.

To help signify this mystery, Catholic statues and images are veiled with purple cloth beginning at the Vespers on the evening before Passion Sunday. Jesus “hides Himself.”

The statues remain covered until the Gloria of Holy Saturday. This is the moment at which the fast of Lent ends and the glory of Easter begins. This unveiling reveals that Christ has revealed himself as risen and victorious.

It’s also a pious custom for lay Catholics to cover blessed images and statues at home during Passiontide with purple veils.
Our Catholic Faith is so rich! Be sure to teach your children and grandchildren these beautiful and ancient traditions!
HT: Fr Phil Wolfe for the St Augustine reference.

Do you believe in the Three Days of Darkness?#DrTaylorMarshall #3DD #ThreeDaysofDarkness

Marriage is from GOD not the State

President Joe Biden has claimed that Pope Francis does not...
1/401
Next»