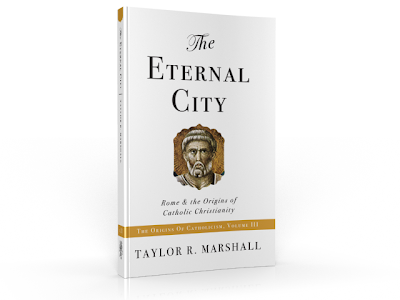 One of the best Catholic bloggers and authors, Devin Rose of the blog “Saint Joseph’s Vanguard,” has recently reviewed my newest book The Eternal City: Rome & the Origins of Catholicism.
I’m really blown away by Devin’s review. It’s just stunning. He begins by giving it a “wow, I wholeheartedly recommend it,” and it just gets better from there.
Devin and I share a lot in common. He is also a convert and he is the author of a book that also deals with Rome titled If Protestantism is True: The Reformation Meets Rome. For this reason, I was really charged up when I saw his positive assessment of The Eternal City.
Devin Rose writes in his review:

The Church is Roman, not because Catholics thought it would be a neat idea, but because God established the principle of unity there. He did so in the face of the greatest Empire the world has ever seen, showing that all earthly power would fall before His divine power and wisdom.

Dr. Marshall boldly proclaims these truths and supports them with solid evidence and arguments. This book brings his series The Origins of Catholicism to a close. I am going to go back and read the previous two books in the series now that I have read this one. It is quick to read, wonderfully informative, and has an irenic tone. Highly recommended.

As you know, Devin Rose is a convert from Protestantism He deeply appreciates why a theological argument for Roman primacy and supremacy is so essential for Christianity. Rome, as Saint Catherine of Sienna taught, is not something incidental to Christianity.
Rome and the Papacy are at the heart of it all. But why? That’s the question that this book tries to answer: “If Christ, Mary, and the Apostles were Jewish and their ministries centered around Jerusalem, then why are we Roman Catholics?” If you’ve ever asked this question, then this book is for you.
Please read the entire review by Devin Rose: “Taylor Marshall’s The Eternal City.” It will give you a taste for what the book is all about.
And to Devin, thank you so much for the kind and generous review. It means the world to me. Please check out Devin Rose’s well-known book about Catholicism titled: If Protestantism is True: The Reformation Meets Rome. While you’re at it, also get my book The Eternal City and get free shipping at amazon.com! Both of our books are also available on your Kindle!
Please also explore Taylor’s other books about Catholicism at amazon.com.
Comment | Share | Tweet | Buffer | print | email