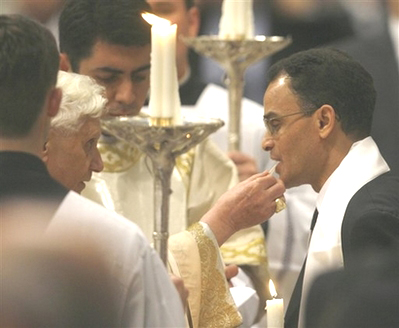 Mr. Magdi Cristiano Allam
Receiving Communion after Baptism
He has now left the Catholic Church…
I was really impressed a few years back when Pope Benedict baptized a Muslim man. His name is Magdi Cristiano Allam. I thought it was great that the Pope himself would baptize such a convert. It symbolized that Christ is truly the King of Kings and Lord of the whole earth.
Well, Mr. Allam just announced that he is leaving the Catholic Church! That’s it. He’s done. He’s out.
Why?
Magdi Cristiano Allam is leaving the Catholic Church because he thinks the Catholic Church has become soft on Islam. And to be honest, I agree with his assessment of the Vatican’s “soft-theology” of Islam.
The new “soft theology” of contemporary Catholic dialogue is not historic, biblical, traditional, Thomistic, etc. We all see it for what it is. The Holy See’s increasingly tolerant stance toward Islam is an attempt to appease the future rulers of Europe: Muslims. This approach is not the way of Saint Pius V, to be sure. Google “Battle of Lepanto” for details.
Here is Mr. Allam in his own words:

“The thing that drove me away from the Church more than any other factor was religious relativism, in particular the legitimisation of Islam as a true religion,” he said. Mr Allam said Islam was “an intrinsically violent ideology” that had to be courageously opposed as “incompatible with our civilisation and fundamental human rights”. “I am more convinced than ever that Europe will end up being subjugated to Islam just like what happened beginning in the seventh century on the other side of the Mediterranean,” he warned. {Quote from the Tablet}

I don’t agree with Mr. Allam for leaving the one true Church of Jesus Christ. I don’t celebrate it or condone it. The apostasy of Mr Allam serves the dead canary in the mine.
We will not convert Muslims to our Lord Jesus Christ if we keep preaching our “ecumenically correct” (EC) public service announcements. Islam is NOT a religion of Abraham. It’s not. It’s an aberration.  Saint John Damascene (Doctor of the Catholic Church) said that Islam is a heresy at best. If Abraham were alive today, he would stand up and curse Islam. It’s a religion of the sword. Always has been. Always will be. Any religion that promises sex with virgins as its highest reward is clearly a religion created by man. Mohammedanism does not have a divine origin. Mohammedanism leads people away from Jesus Christ.
“But Dr. Marshall. You don’t really understand. I mean have you ever really read the Quran?” Yes, I have the full audible version of the Quran on my iPhone and I listen to it. I read it. I study it. It’s bad news.
Think about it this way. The Catholic Church, once upon a time, converted the nations of Europe. These converts had previously practiced forms of paganism and animism.
What if the Pope and bishops back then began glad-handing with the ecumenical heads of the religions they were supposed to be baptizing? What if Pope Gregory the Great were celebrating diversity with the priests of Thor and priestesses of the Frigga? Do you know how discouraging that would be for these new converts among the freshly baptized German tribes?!
I’m going to be transparent with you. It absolutely destroys me whenever I see photos of the Pope and the Archbishop of Canterbury posing for pictures. Many former Anglican priests made enormous sacrifices to enter into communion with the Pope. I gave up my life and vocation as an Anglican priest to be in communion with the Pope. To see the Pope smiling and celebrating with our “old boss” is very discouraging.
My opinion is that the ecumenism of the last 40 years does more harm than good – when it comes to people who are actually becoming Catholic. Magdi Cristiano Allam is Exhibit A. Here is a man who was baptized by the Pope himself. Now he is gone. How sad.
Now it’s your turn. We can agree that there is no excuse to leave the Church, but is the Catholic Church hurting her children who are former Muslim children by being ecumenically correct and overly tolerant? Is this about Christ or COEXIST? Please leave a comment. 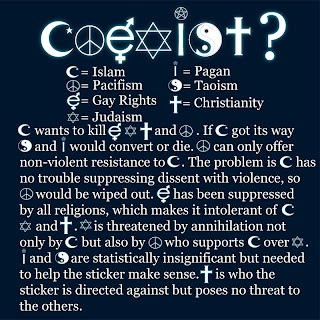