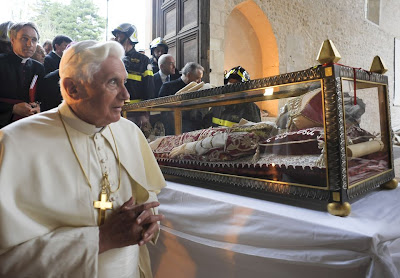 As I mentioned in yesterday’s post, Pope Benedict subtly signified his thoughts about resignation over three years ago when he removed his papal pallium, and then placed it on the coffin of Saint Celestine V – the only sainted Pope to have resigned the papacy. The pallium is the white woolen garment the Pope wears on his shoulders. It signifies that the Pope carries the sheep of Christ upon his shoulders as the Vicar of the Good Shepherd Jesus Christ. The Holy Father also allows the cardinal to wear the pallium as a sign of their communion with Rome.

Below is a photo collection telling the story in images. The photos depict the Holy Father receiving the pallium in 2005 and then his symbolic placement of the pallium on the glass sarcophagus of Saint Celestine:

Looking back, Pope Benedict’s gesture was prophetic. The photos reveal that His Holiness has been wrestling with the idea of abdication for a number of years:

(If you receive my daily blog email and you don’t see the photos, click “Always show all images” in your email settings above this message.)
First, here is Pope Benedict receiving the papal pallium on the day of his installation as Pope in 2005: 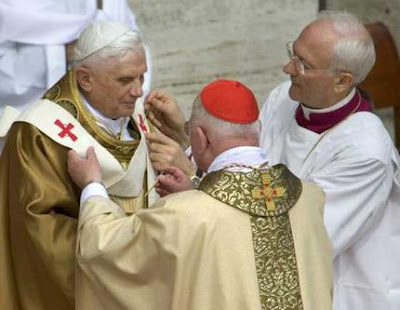 Now here is Pope Benedict, in April 2009
praying before the body of Saint Celestine,
the pope that resigned in AD 1294: 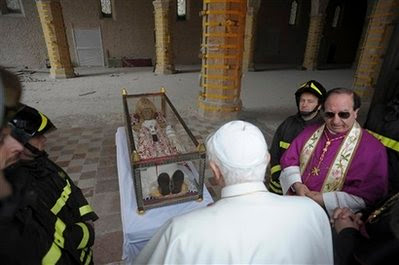 In the next photo, you can see Pope Benedict after
he had left his papal pallium on top of the glass sarcophagus.
It’s the little white fabric folded up just in front of His Holiness’ face:

Here’s another photo of St Celestine’s body with Pope Benedict’s pallium on top: 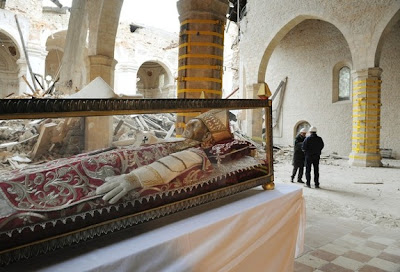 Lastly, here is the most obvious photo of the event.
Here we can see Pope Benedict’s pallium on top of the glass sarcaphagus of St Celestine V.
The firemen are wondering: “What should we do with this pallium?” 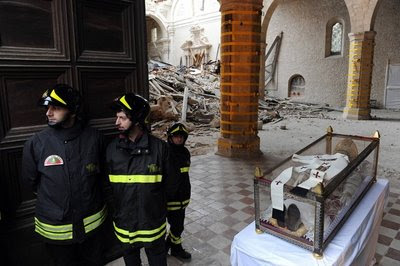 One source reports that the pallium left on Saint Celestine was the exact pallium that he received on the day of papal installation.*
For Catholics all over the world, yesterday was a confusing and prayerful day. Pope Benedict’s announcement of his abdication has raised practical and spiritual questions. When I first heard the news from my assistant, I thought it was a media stunt. After I confirmed it, I spent the next few hours trying to process what this means for the future.
As I’ve said before, I love Pope Benedict and I’m confident that His Holiness is making the right decision for the Catholic Church. His Holiness is making the right decision for all of us. Be not afraid! By announcing this news on the feast of Our Lady of Lourdes, I personally believe that there is a Marian inspiration behind all of this. Perhaps she appeared to His Holiness.
If you are interested in more, please see my previous post on the connection between Pope Benedict XVI and Pope Saint Celestine V.
Do you enjoy reading these posts by Dr. Taylor Marshall? Make it easier to receive daily posts. It’s free. Please click here to receive daily posts through e-mail. Privacy Guarantee: Your e-mail will never be shared with anyone. Please also explore Taylor’s books about Catholicism at amazon.com.
*Owen, Richard (28 April 2009). “Pope Benedict XVI visits Abruzzo earthquake zone to pray for victims”. The Times. Retrieved 19 May 2011.
Comment | Share | Tweet | Buffer | print | email