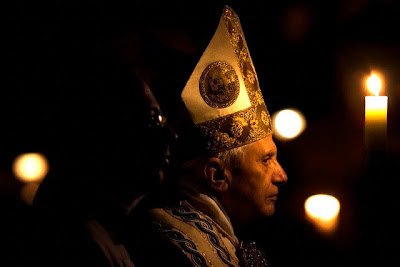 A photo from the Mass I attend with Pope Benedict
In 2006, when I was still an Episcopalian priest, Joy and I visited Rome. Intellectually we were coming to recognize that the Catholic Church was the true Church, but we needed the emotional push to bring the decision to fulfillment.
In Rome, we were able to take the Scavi tour underneath Saint Peter’s Basilica. At the end of the tour, we saw the bones of Saint Peter. I prayed earnestly that I would soon enter into full communion with Saint Peter and his successor on earth, Pope Benedict XVI.
After the tour, the Belgian priest, who had been our tour guide, stayed behind and struck up a conversation with us. We had been so excited and impressed by the tour. When I told him that we were not Catholics, but that I was an Episcopalian priest, his face lit up. He was writing his dissertation in Rome on some ecumenical matter.
Then he surprised us with a question: “Would you like to attend Holy Mass with the Pope this evening?” The answer to that question was obvious. The Belgian priest was pleased to make arrangements. We walked from the Scavi entrance on the south side of Saint Peter’s, across Saint Peter’s Square, and then up a staircase to the north. At the top were two Swiss Guards with pikes. The Belgian priest told us to wait there. He mumbled some Italian to the guards and disappeared.
A few minutes later he returned with two orange tickets, which were marked with that evening’s date and were issued by the Palazzo Apostolico Vaticano. The Belgian priest told us to return to Saint Peter’s an hour before the Mass with those tickets. We had a nice chat, and the priest went about his business. To my shame, I don’t know his name. (Father, if you’re out there, let me know!)
That evening, my wife and I attended the Holy Mass of the Purification with Pope Benedict. At this particular Holy Mass the Holy Father recognized the various religious orders of the world. We were in line with hundreds of nuns, friars, and monks. We were clearly out of place—a married Episcopalian priest in a cassock with a pregnant wife. My dear! I hope we did not scandalize all those nuns.
The Holy Mass was glorious. It began in total darkness. Pope Benedict XVI entered the back doors with only a candle. From this candle was lit all the candles of the nuns, monks, and friars. For the whole Mass, we were near the bronze statue of Saint Peter. I could see the Holy Father clearly. I knew that His Holiness was the true successor of the Fisherman, and recalling that just that morning I had been deep underneath that altar at the bones of Saint Peter, the connection between the ministry of Saint Peter the First Pope and that of Benedict XVI the present Pope was made manifest right before my eyes.
When it came time for Holy Communion, I knew that I could not go forward to receive. Although the Basilica was now lit with glorious light and joy, my soul remained in the darkness.
I was not a Catholic. I was not in communion with the Holy Father. I was in schism. It was a sickening feeling. I was out of communion with the Vicar of Christ, and I knew in that moment that my relationship with Christ was impaired. I also knew what I had to do. I had to resign the Episcopalian priesthood and become a Catholic.
That Mass was one of the most important events in my life. When we got back from Rome, the process began. When I think of Pope Benedict, I’ll always recall that Holy Mass on February 2, 2006 – a Holy Mass that changed my life forever. Viva Papa!

The post above is excerpt from my new book: The Eternal City: Rome & the Origins of Catholicism. Please take a quick look at the new book by clicking here.

Question: What was your favorite moment during the reign of Pope Benedict XVI? Please leave a comment below.