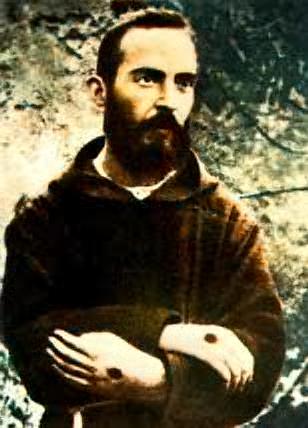 When I was still a Protestant, someone gave me a holy card of Padre Pio. At that time, Padre Pio was still a “blessed,” as he was not yet canonized. The friend explained that the bearded priest depicted on the holy card had experienced the stigmata. I still have the holy card around here somewhere.
I remember being impressed by two things. First, that someone could actually receive the stigmata. Secondly, that modern people believed that these sort of things could still happen in our “enlightened age.” Since then, I grown to love Saint Pio more and more. Perhaps he was praying for me along my way into the Catholic Church.
I recently read something about Padre Pio that impressed me. It was a quote from Padre Pio about his agony over becoming a Franciscan friar when he was about fifteen years old:

“I felt two forces clashing within me, tearing my heart: the world wanted me for itself, and God called me to a new life. It would be impossible to describe this martyrdom. The mere memory of the battle that took place within me freezes the very blood in my veins.”

Padre Pio’s life reveals that we should not assume that God reveals everything to us when He wants to begin a great supernatural transformation in our souls. Look at Noah, Abraham, Moses, David, Elias, Esther, John the Baptist, the Blessed Virgin Mary, and the Apostles. Could they have imagined where their lives would have taken them? God hides the future from us for good reason.
Padre Pio is a 20th century reminder that God still works this way. If you’re struggling with God’s will for you life, then that’s a good sign. If you’re squirming, welcome to the club. You’ve got Padre Pio in your company…and all the saints.
In my life, I look back at those “valley” moments and I can honestly say that God has produced something amazing every single time. When I was leaving the Episcopal priesthood, I honestly didn’t know what I would do next. How would I earn a living? Where would I live? It was a complete mystery. Yet, if I had waited for God to reveal all the details, I would still be an Episcopalian priest…

Did I feel “two forces clashing within me,” like Saint Pio described? You bet I did! But somewhere along the line, the still small voice of the Holy Spirit guides in you in the right direction. We still squirm, but we’re not left as orphans.

I’d like to hear your experience. Also, do you have any advice for those who feel what Padre Pio called, “two forces clashing within me, tearing my heart”? Please leave a comment.

Just a reminder, if you leave comments with hyperlinks going to other websites, your comment will automatically go to my “Comment Purgatory” where they wait to be released. So if you don’t see your comment immediately, you either included a hyperlink or a cuss word. Let’s hope its the former.