Yesterday at Fisher More College after lunch, our chaplain playfully referred to the “modern” assumption that Saint Peter and Saint Paul “just didn’t get along.” He was joking, of course. However I’ve heard others seriously affirm that the only way to get these two men together was to give them a feast day on the same day (June 29).
This is a bunch of poppycock. Saint Peter and Saint Paul were united. There is the incident between Peter and Paul in Galatians, I know. However, everything else we read in Scripture and learn from Tradition reveals two men who were united in prayer, purpose, and theology.
I love Saint Paul. He’s one of my favorites. Anyone who has read the entire New Testament cannot help but being attracted to Saint Paul. Of all the Apostles, he has the most recognizable “voice.” He leaps of the pages of his Epistles and you feel that you know him.
Back in 2007, after I had been Catholic for almost a year, I was standing in an outdoor metro station in DC talking on the phone with my friend Dave Stotts who is the face and host of “Drive Through History” on the History Channel. 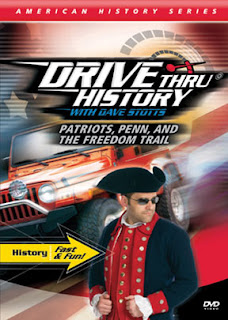 Sorry, Dave, I hope this doesn’t embarrass you!
Dave is obviously a history buff and also has a Masters in theology. He’s an Anglican asking the right questions. Dave said on the phone that day, “You know, what the world really needs is a solid book for lay people that explains Paul from a Catholic point of view. Where can someone go to find that book.”
That stuck with me. I agreed with him. Most “Paul studies” say that Paul was a Protestant or a pre-Gnostic, or an impostor to the religion of Christ. Even so-called “Catholic scholars” of our era tend to grant way too many points to the Protestants. Where, then, is the all-in-one defense of Paul as a Catholic?
So I began to think about how this “Catholic-Paul” argument would be made? How do we capture the obvious fact that Paul is Catholic? He’s celibate. He’s sacramental. His baptismal and Eucharistic theology is out of this world. His ecclesiology is hierarchical. It all began to come together.
During my Ph.D. coursework, I sat down one summer and cranked out the “Paul book.” It took about three weeks. I locked myself away. I got a really bad cold. I just slammed away at the keyboard. Finally, the book emerged: The Catholic Perspective on Paul.
The purpose of the book is not to make an attempted case for a Catholic Paul. The purpose is to make a slam-dunk case for a Catholic Paul. My goal is that for anyone who read this book, he would walk away and say, “Yes, this is right. It adds up. Everything Paul teaches, the Catholic Church teaches.”
The book examines contraception, redemptive suffering sacraments, priesthood, celibacy, homosexuality, even Paul’s Mariology (must people assume Paul didn’t have a Mariology at all).
Of my three books, The Catholic Perspective on Paul gets the least attention. I’ve been told that Kenrick-Glennon Seminary in Saint Louis uses it as a required text book. That is wonderful, but I fear that lay people have not yet discovered it. At the lay level, it’s not as provocative as the other two books. However, on a scholarly level, it’s perhaps the most provocative of the three since it’s the one moving  against the grain.
The goal is to spread the message that the Saint Paul in the stained glass window of the Catholic Church is in fact the historical Apostle Paul who sacrificed his life for the sake of Christ’s Gospel.
I fear that we Catholics have a great opportunity with Saint Paul in the realm of apologetics and theology and that we’re missing it. The Lutherans and Calvinists have always put so much effort into exploiting Paul that they almost always get heard. However, we Catholics have the true and best perspective, yet we remain quiet.
If you’ve read the book, please leave some feedback in the comments. It’s been out for awhile now, and I’d like to hear your feedback. If you haven’t read The Catholic Perspective on Paul, please take a look at it (it’s on Kindle, too) and let me know what you think about it in the comments.
Please take a moment to watch my short video explaining how Saint Paul is Catholic: