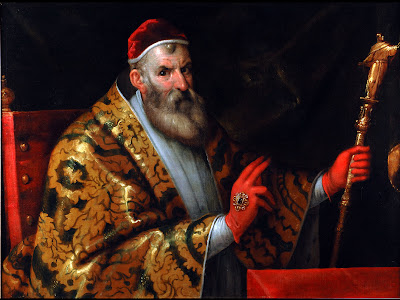 Pope Sixtus V, First Pope to Issue Bull Against Abortionists
Believe it or not, abortion was a growing problem way back in the 1500s. Some have speculated that this this was a response to an increased rate of prostitution. Whatever the case may be, Pope Sixtus V formally condemned abortionists in his papal bull Effraenatam, meaning in Latin ‘without restraint.’ The Holy Father uses the strongest words against those who kill the child while still in his mother’s womb.
Pope Sixtus V, born with the name Felice Peretti di Montalto, was an interesting man. He was a Franciscan. Before he was elected Pope, legend states that Nostradamus once approached Felice, knelt down, kissed his cloak, and proclaimed that Felice would one day be Pope.
As Pope, Sixtus planned to turn the Colosseum into a silk weaving factory – a plan that never came to pass. Sixtus also had an ingenius way to avoid war with the Turks and end the Crusades once and for all. He would simply transfer the entire Holy Sepulchre of Christ from Jerusalem to Rome! No more pilgrimages necessary!
Pope Sixtus V issued Effraenatam from Mount Quirinal in Rome on November 29, 1588. The bull excommunicates those involved in abortions, but reserves varying degrees of punishment for varying degrees of involvement in the attempt to procure an abortion, as well as specific punishments for participants of particular vocations, e.g. clerics, pharmacists, and employers.
The Holy Father lists the dreadful means for procuring an abortion in his day. He describes the methods as “blows, poisons, medicines, potions, weights, burdens, work and labor imposed on a pregnant woman, and even other unknown and extremely researched means.” He also speaks of contraception as potions used to prevent conception.
Here’s a quote against abortionists found in Effraenatam:

“Noticing that frequently by various Apostolic Constitutions the audacity and daring of most profligate men, who know no restraint, of sinning with license against the commandment “do not kill” was repressed; We who are placed by the Lord in the supreme throne of justice, being counseled by a most just reason, are in part renewing old laws and in part extending them in order to restrain with just punishment the monstrous and atrocious brutality of those who have no fear to kill most cruelly fetuses still hiding in the maternal viscera. Who will not detest such an abhorrent and evil act, by which are lost not only the bodies but also the souls?”

I’d like to hear your thoughts on three things in particular:
First, I find it amazing that this was a huge problem in a Catholic era – the 16th century. Although there is reference to abortion and contraception in early Church documents, I naively assume that abortion is a recent phenomenon. Surely, it was not as common as it is today, but is there any way to know what abortion rates were like back then?
Second, the Holy Father refers to abortion as “monstrous and atrocious brutality”? Why don’t we use that kind of language in public discourse?
Third, the Holy Father says that the victims of abortion, the babies, lose their bodies and also their souls. Is this a reference to limbo? That is, do the aborted, without baptism, lose the beatific vision? It seems this is the sense of the quote.
Please leave a comment below and share your opinion on these matters.
Do you enjoy reading Canterbury Tales by Taylor Marshall? Make it easier to receive daily posts. It’s free. Please click here to sign up by Feed or here to sign up by Email. Please also explore Taylor’s books about Catholicism at amazon.com.
Comment | Share | Tweet | Buffer | print | email