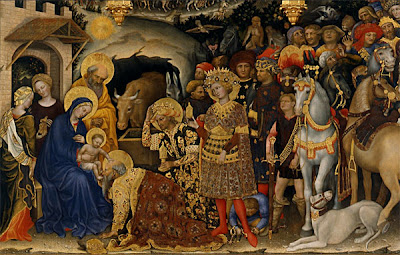 Church history is plagued by the recurring heresy which denies that Christ is fully God. The most insidious attempt to push this false theology on the Church occurred in the fourth century. The heresiarch Arius galvanized a majority of influential clergy in laity as the so-called nouvelle théologie of budding Christendom. Arius wrongly taught that the Son of God was not eternal with the Father and that the Son of God was therefore created. This entailed that the Son of God does not share the same divine substance as God the Father. As you know, the Catholic Church condemned these errors at the Council of Nicea (325) and the First Council of Constantinople (381).
Contrary to the claims of the heretics, the adoration of the Magi toward the Christ Child proves that this tiny Jewish baby is much more than a created person. Christ had not proved Himself by any external deeds. He did not possess any external wealth or power. This reveals that the Magi perceived the infant to be a Divine Person, God Himself.
In a sermon on the Epiphany of Christ, Saint Augustine explains: “Though many kings of the Jews had been born and died, none of them did the Magi seek to adore. And so they who came from a distant foreign land to a kingdom that was entirely strange to them, had no idea of showing such great homage to such a king as the Jews were wont to have. But they had learnt that such a King was born that by adoring Him they might be sure of obtaining from Him the salvation which is of God.”
The Magi were kings, royal men. They were familiar with kings and the Christ Child exhibited none of the earthly traits of a king. Rather, Christ’s credentials came from a supernatural star. This proved to the Magi that this Child was the Lord and Creator of the Stars and therefore the King of Kings and the Lord of Lords. The Magi were no Arians.
Pope Saint Leo the Great writes “they might seek with more ardent faith Him, whom both the brightness of the star and the authority of prophecy revealed” (Serm. xxxiv).
How amazing it is that Gentile kings, once idolatrous men, were the first to bend their knees in homage while the rulers and priests of Israel ignored Christ and then sought to kill Him. Herod and the apostate Jews of that time were, then, the first Arian heretics. They were the first to deny divinity of Christ by their actions. The Magi, on the other hand, were the very first defenders of Catholic Orthodoxy. By their arduous journey and beautiful gestures, they acted out what St Athanasius and the Cappadocian Fathers defended by word and by pen.
I am surprised that no one has ever written an icon like this. Wouldn’t it be rather stunning to have an icon in which the Three Magi as “adorers of the divinity” were paralleled with St Athanasius, St Gregory Nazianzus, and St Basil as “defenders fo the divinity”? Gifted icon writers of the world…get to work.
Are you interested in the role of Gentiles and Jews in the emergence of the Catholic Faith?