The comments and traffic from the previous post titled “My Initial Doubts about the Latin Mass” reveal that this is a topic of interest. I was so delighted to see, for the most part, good will on the part of everyone engaged in the discussion. The comments have been exceptional. 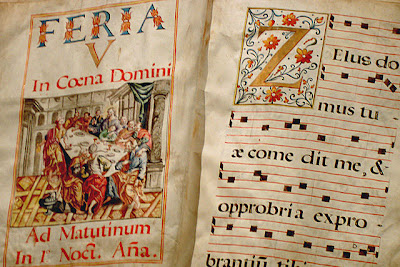 I realize that “My Initial Doubts about the Latin Mass” addressed the negative stereotypes and did not celebrate the positive aspects that attracted our family to a Latin Mass parish – Mater Dei Catholic Church in Irving, Texas. I’d like to address one positive element to which most of us can readily relate. Music at the Holy Sacrifice of the Mass.

Let me begin with a biographical story.

In 2010, Joy and I brought our then five children to Latin Mass. I had been to the Latin Mass a few times. Joy had been once before, I believe. Our children had never seen it.

Let me tell you something. They were so good at Holy Mass that morning. I mean, absolutely excellent.  Like the little beautiful children depicted in the Baltimore Catechism. That good. We were thrilled by the precise liturgy, the homily, the glorious music…and our children’s behavior that Sunday morning. What happened?

I’m not sure, but I think it had to do with the music. Of course, our children saw altar-boys that meant business. (By the way, our sons wanted to be altar boys whenever they saw these Marine-like altar boys at the Latin Mass.) They saw and smelled the incense. They heard the bells. They had seen this occasionally at some Novus Ordo Masses, but here at the Latin Mass it was all packaged so tightly. The full effect projected holiness. Most importantly, the music was not sing-songy 1970s jingles performed by a lady on a microphone. The choir was in the back of the church, not microphones, and the chants wafted over the liturgy like the incense hanging in the air.

Gregorian chant is a music unlike any other. As Martin Mosebach wrote, “Gregorian chant is not art music. It exists to be sung in every village church and every suburban church, in spite of the fact that some of it is difficult and requires practice – and people did practice it, hearing it every Sunday all their lives.”

What? Chant sounds strange? Precisely. That’s exactly the point. Mosebach again: “What the bishops forgot was that this music had sounded strange even to the ears of Charlemagne and Thomas Aquinas, Monteverdi and Haydin: it was at least as remote from their contemporary life as it from ours.”

The chant of the Church is otherworldly. That’s the point. Why did certain Jesuits think that they could replace chant with music that sounds like rejected broadway musical numbers? And why did parishes begin buying this liturgical “music”? Most Catholic parishes have terrible music. Yet there is an obvious, simple (and inexpensive) solution to the problem.

116. The Church acknowledges Gregorian chant as specially suited to the Roman liturgy: therefore, other things being equal, it should be given pride of place in liturgical services.

But other kinds of sacred music, especially polyphony, are by no means excluded from liturgical celebrations, so long as they accord with the spirit of the liturgical action, as laid down in Art. 30.

One might reply, but the Council doesn’t mandate Gregorian chant exclusively. You’re right, it makes an exception…for polyphony. So if you’re going to opt out of chant, don’t turn to the St Louis Jesuits, embrace Palestrina instead.

Does your local Novus Ordo parish not give Gregorian chant the pride of place? If not, they are not faithful to the Council. That should ruffle some feathers, but I don’t see any way around it. Chant is Judaic and it has a 2,000 year tradition in the Church founded by the Second Person of the Holy Trinity. If you’re anti-Gregorian chant, you’re also anti-Tradition…and anti-Vatican 2.

We must agree with Plato that music is very important in forming our souls. I believe that it is essential that my children grow up hearing a certain kind of music at Holy Mass – the music endorsed by the magisterium. For the sake of your children and their formation, get to a parish with liturgical music that is dignum et justum.

Saint Gregory the Great, pray for us.

Saint Cecelia, pray for us.

12 Promises of the Sacred Heart of Jesus: Peace in Home and Life

Dr. Taylor Marshall explains why the Sacred Heart of Jesus...
44:29

Archbishop Carlo Maria Viganò provides a new commentary on the...
33:46