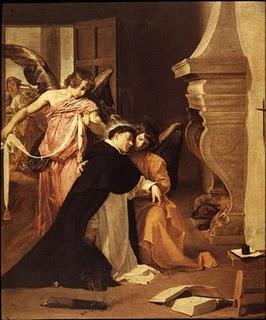 Saint Thomas  Aquinas being girded with Holy Purity
Saint Thomas Aquinas is a theological giant. His works are immense. His intellect is unparalleled. He was a profound philosopher. He was one of the Church’s best biblical exegetes. Scarcely a day passes when I do not refer to his works. However, we must remember that Saint Thomas Aquinas was a man of great holiness. Thomas was a friar committed to sanctifying his daily work.  To give you an insight into his holy life, please allow me to share three episodes that stand out in this regard.
First Episode: the Angelic Girdle
As you know, Saint Thomas’ family locked him on the family tower so as to “dissuade” him from becoming a Dominican friar. They wanted him to be a prestigious Benedictine Abbot. A prostitute was given entry to his room and he chased her out with a smoldering log (see picture above). What happened next is impressive. With the charred log, he drew a cross on the wall of his room and knelt down in veneration. Immediately, two angels of purity appeared to him and placed an angelic girdle around his waist. For this day forward, he never suffered a lustful thought or action in his whole life. This holy purity is the key to Saint Thomas’ massive intellect.
I wear the girdle of Saint Thomas Aquinas. It’s a sacramental in which a Dominican priest can enroll you. It’s a sign and a prayer for holy purity.
Second Favorite Episode: Conversations with Saints Peter and Paul
As I wrote a few days ago, I love Saint Paul. What you may not know is that Saint Thomas’ commentary on Saint Paul’s Epistles are perhaps the best of all time. His commentary on Romans and Hebrews are out of this world. Few understood how Saint Thomas could have such insight into these Epistles.
The secretary of Saint Thomas, Friar Reginald, would sometimes hear Thomas conversing with men in his cell. Who were these mysterious men? This was reported to the prior who demanded on holy obedience that Saint Thomas reveal the nature of these conversations.
Very reluctantly Saint Thomas revealed that Saint Peter and Saint Paul would visit him in his cell and explain the meaning of their words in the Epistles! It’s no wonder that Thomas wrote such brilliant commentaries. He was being tutored by the holy Apostles themselves as to their meaning.
Third Favorite Episode: The Saint Nicholas Day Vision
On the feast of Saint Nicholas (Dec 6) in the year before he died, Saint Thomas had a vision while celebrating the Holy Sacrifice of the Mass. Afterward, he told Friar Reginald that he would not continue  writing his Summa theologiae, since all that he had written, “seems like straw” compared to what he had seen. What did he see that day? Nobody knows. However, this episode reveals that Thomas was a great mystic. He was not caught up in intellectual pride. He had a great and passionate love for Christ. This became real in the context of the Holy Eucharist.
Those are just three of the many great episodes from the life of Saint Thomas Aquinas. Please feel free to ask questions below or leave a comment about your favorite episode from the life of Saint Thomas Aquinas. Join the great conversation!
Do you enjoy reading Canterbury Tales by Taylor Marshall? Make it easier to receive daily posts. It’s free. Please click here to sign up by Feed or here to sign up by Email. Please also explore Taylor’s books about Catholicism at amazon.com.
Comment | Share | Tweet | Buffer | print | email