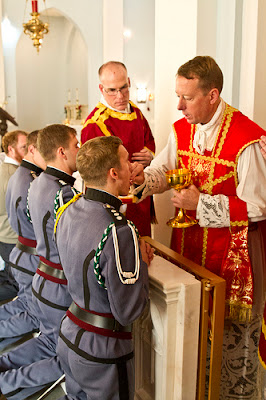 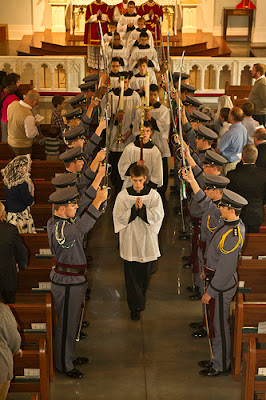 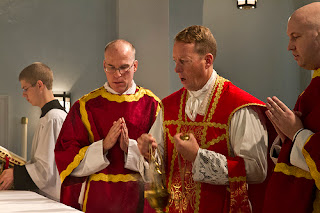 I recently came across these glorious photos and stories from “A Priest Life” blog. It’s a Latin Mass (EF) for Veteran’s day.
It is a reminder that true Catholic liturgy is ordered, disciplined, and masculine. Any liturgy that is less disciplined and ordered than the changing of the guard at the Unknown Soldier’s tomb at the Arlington Cemetery is not worthy of the name “Catholic.”

If you don’t know what I’m talking about, watch this video:

Why should a deceased American soldier receive more attention and precision than the resurrected Godman who has redeemed us from every tribe, tongue, and nation? The Holy Mass depicted in the photos above inspires men to pull out chairs for women, marry good women, have children, be heroic fathers, throw themselves on grenades, attend Mass, and/or fight for what is good.

Here are the details of this Holy Mass:

A Solemn High Mass in the extraordinary form of the Roman rite was celebrated at Saint Benedict Church in Chesapeake, Virginia, on November 12 for all of our veterans on the occasion of Veterans’ Day.

Uniformed military service members and families were in attendance. Cadets from Benedictine Military Preparatory Academy in Richmond provided the flag honor guard at the commencement of the Mass and a sword arch for entrance and recessional prcoessions as well as at the consecration of the Mass.

Just another reminder, men, to lead your family to Catholic churches where there are glorious Masses, traditional devotions, devotion to Mary, and strong orthodox sermons. If you want your children to lose their faith, insure that they regularly experience Masses that showcase 1970s Jesuit jingles, manucommunion (Communion in the hand), and ho-hum sermons that undermine the Catechism.
Whatever you do, please pray the Rosary daily.
Do you enjoy reading Canterbury Tales by Taylor Marshall? Make it easier to receive daily posts. It’s free. Please click here to sign up by Feed or here to sign up by Email. Please also explore Taylor’s books about Catholicism at amazon.com.
Comment | Share | Tweet | Buffer | print | email