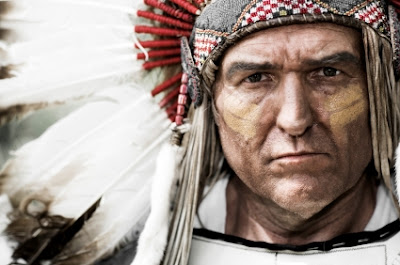 Do you remember Squanto, the Native American who assisted the Puritan Pilgrims at the “first Thanksgiving”?
Well, Squanto, our beloved hero of Thanksgiving, was Catholic!
His true name was Tisquantum, yet he is affectionately known to us as “Squanto.”
In 1614, Squanto was captured by a lieutenant of John Smith (remember? from Pocahontas). This shameful lieutenant attempted to sell Squanto and other Native Americans into slavery via Spain. However, some Franciscan friars discovered the plot and acquired the captured Native Americans, Squanto included. During this time, Squanto received instruction in the Catholic Faith and received holy baptism.
As a freeman, Squanto traveled to London where became a laborer in the shipyards. Here he became fluent in English. Eventually, Squanto was able to return to his Native Land, New England, in 1619 – five years after he had been kidnapped. He returned only to discover that his people were being decimated by the recently imported European diseases.
Since he was fluent in English, Squanto became well-known and valuable to the new English Pilgrims settled at Plymouth. As an English speaker, Squanto taught the Pilgrims how to fertilize the ground, grow corn, and the best places to catch fish.
Squanto eventually contracted one of the European diseases. Governor William Bradford described Squanto’s death like this:

Squanto fell ill of Indian fever, bleeding much at the nose, which the Indians take as a symptom of death, and within a few days he died. He begged the Governor to pray for him, that he might go to the Englishman’s God in heaven, and bequeathed several of his things to his English friends, as remembrances. His death was a great loss.

So remember Squanto today and perhaps share this bit of history during your Thanksgiving feast. Let us pray for Squanto, and may he pray for us.
To learn other tidbits about Catholicism and Thanksgiving, click here.
Do you enjoy reading Canterbury Tales by Taylor Marshall? Make it easier to receive daily posts. It’s free. Please click here to sign up by Feed or here to sign up by Email. Please also explore Taylor’s books about Catholicism at amazon.com.
Comment | Share | Tweet | Buffer | print | email