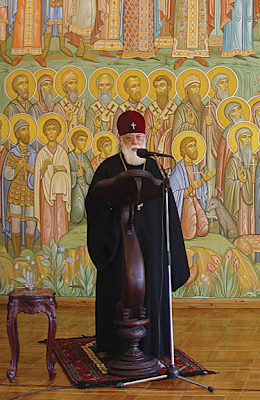 Bishops and birth rates. In 2005, His Beatitude Ilia II, Orthodox Patriarch of All Georgia, became aware that the birth rate in his post-Soviet nation of George was in a downward spiral.
Patriarch Ilia began to preach about “large families” as one of the key elements of Christian civilization. To put it simply, the birth rate and the “faith rate” tend to mirror one another. Look at nations that have rejected the Church and you’ll see that these have the lowest birth rates. Perfidy and despair go hand in hand.
In 2008, not only did he preach big families, but the Patriarch promised to personally stand as Godfather for all babies born into Georgian homes with more than two children.
His initiative was widely successful and has since increased the birth rate by 25 percent! Meanwhile, the number of abortions in the nation of Georgia decreased by 50 percent!
The President of George commended the Patriarch saying, “We should be thankful to the Patriarch for continually remind the Georgian people that we should multiply.”
My goodness, what a wonderful model for the Western bishops. Can you imagine if bishops all over Europe, America, and Latin America began to preach big families, and then personally stood as Godfathers so as to provide encouragement and hope to married couples who fear more than three children? What a difference it would make.
Patriarch Ilia…Axios! Axios indeed.
PS: The Patriarch has over 11,000 godchildren!
HT: I found this story in the Catholic Newspaper provided by the laudable Transalpine Redemptorists (Sons of the Most Holy Redeemer). I highly recommend it. $40 for an annual subscription.
Transalpine Redemptorists
OLGS Seminary
7880 W. Denton Rd
Denton NE, 68339
Do you enjoy reading Canterbury Tales by Taylor Marshall? Make it easier to receive daily posts. It’s free. Please click here to sign up by Feed or here to sign up by Email. Please also explore Taylor’s books about Catholicism at amazon.com.
Comment | Share | Tweet | Buffer | print | email