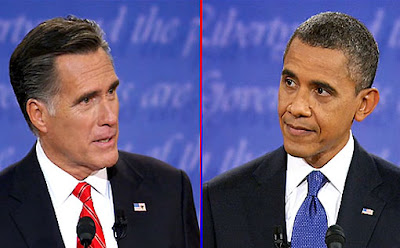 My wife and I watched the Presidential debate last night. I was very discouraged about two things in particular. First, I was again shocked how President Obama so confidently touts his endorsement and support of Planned Parenthood as a major “asset” to his political platform. The same was seen last week with VP Joe Biden using scare tactics that Romney/Ryan would take away “womens’ rights.”
This reveals that President Obama and his administration are not merely tolerant of abortion, but promoters of this great evil calling to Heaven for vengeance. This is not a surprise. Still, it is sad to see that the political climate has become this dark.
Second, all my initial excitement about Romney was deflated by his defense of contraception in the second half of the debate. Also, his claim that he “believes in God” rang hollow for me as a Catholic and a theologian since it is publicly known that the Mormon doctrine of God is radically different from that held by historic Christianity. Mormons are polytheistic in conviction but henotheist in worship. Philosophically and theologically, this is a disaster. It is a reminder that Romney is not a Christian, but rather a heretic. I haven’t done the research, but my guess is that Romney would be the first unbaptized President in our nation’s history. Scary to think about.
So at the end of the night, you are confronted with two men who are ultimately mistaken in their most fundamental principles. Of course, Romney is the lesser of two evils on account of liberty for the Catholic Church and government funded contraception and abortion.
Still, it’s not satisfying.
It leaves me longing for Heaven.
One last comment. This morning in my spiritual reading, my eyes randomly fell on the following Psalm:
Nolite confidere in principibus, in filiis hominum, in quibus non est salus. (Ps 146 2-3)
“Put not your trust in princes. In the children of men, in whom there is no salvation.” (Ps 146 2-3)
God made my smile and he reminded me of the truth of our tough situation. The lesson is that prayer and praise will undo the snares of the devil much more than a President, be he baptized by Rev. Jeremiah Wright or baptized in the Mormon “Church.”
Christ the King, have mercy on us.
Our Lady of Victory, pray for us.
Do you enjoy reading Canterbury Tales by Taylor Marshall? Make it easier to receive daily posts. It’s free. Please click here to sign up by Feed or here to sign up by Email. Please also explore Taylor’s books about Catholicism at amazon.com.
Comment | Share | Tweet | Buffer | print | email