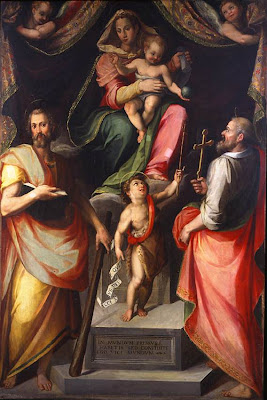 First is the glorious Ever Virgin Mary, Mother of God and Our Lord Jesus Christ. Next, is Saint Joseph the Spouse of the Virgin (this invocation of Joseph was added by His Holiness Pope John XXIII).
Then 24 saints follow. The number is significant for two reasons. First is it 2 x 12. The number twelve denotes the fullness of God’s people. For example, in the Apocalypse they are symbolically numbered 144,000 (12 x 12 x 1000). The second significance is that the Apocalypse describes 24 elders or ancients around the liturgical throne of the the Lamb of God in Heaven.

“And round about the throne were four and twenty seats: and upon the seats, four and twenty ancients sitting, clothed in white garments. And on their heads were crowns of gold.” (Revelation 4:4, D-R)

The first 12 saints listed are 12 Apostles: “Peter and Paul, Andrew, James and John, Thomas, James, Philip, Bartholomew, Matthew, Simon and Jude.”
Note here, that Judas Iscariot is not present for obvious reasons. However, Matthias, the Apostle who replaced Judas is also absent. Instead, Saint Paul is included at the head of the list to bring the number of Apostles to 12. Don’t worry, Matthias appears in the Nobis quoque, which we will discuss below.
The next 12 are early martyrs of the Catholic Church: “Linus, Cletus, Clement, Sixtus, Cornelius, Cyprian, Lawrence, Chrysogonus, John and Paul, Cosmas and Damian.” These saints represent the hierarchy of the Catholic Church: Pope, bishop, deacon, laity.
The first five are martyred Popes:
1) Saint Linus – the second Pope; successor to Saint Peter
2) Saint Cletus – the third Pope; successor to Saint Linus
3) Saint Clement – the fourth Pope; successor to Saint Cletus; author of 1 Clement
4) Saint Sixtus II –  reigned as Pope from A.D. 257-258 and martyred under the persecutions of the Emperor Valerian. His beloved deacon was the well-known Saint Lawrence.
5) Saint Cornelius – reigned as Pope from A.D. 251-253. He was martyred under the Emperor Gallus.
The next saint is a bishop:
6) Saint Cyprian – defender of the Catholic faith; beheaded in Carthage, Africa in AD 258.
The next saint is a deacon:
7) Saint Lawrence was martyred under the same Valerian edict that condemned Pope Saint Sixtus II mentioned above. Lawrence was roasted alive on a grid iron.
The next five saints are laymen:
8) Saint Chrysogonus was an officially that received martyrdom in the persecutions of Emperor Diocletian.
9 & 10) Saints John and Paul were martyred under Julian the Apostate. Here’s a previous post I did on these two saints.
11 & 12) Saints Cosmas and Damian were physicians who were martyred in Syria, around A.D. 287 during the Diocletian persecutions. These men were fantastic, here’s a post I did on the legend of how that transplanted a black man’s leg onto a white man.
What’s wonderful about these saints is that they represent the popes, bishops, deacons, and laity of the Catholic Church…but not just in the city of Rome. We have martyrs in Rome, Africa (Cyprian), Asia (Cosmas & Damian), and Europe (Chrysogonus).
The dates of their martyrdoms reveal that the prayer came to be after the persecutions of Diocletion. This places the prayer in the late AD 300s or 400s. Pretty early! This confirms the Roman tradition that the Canon of the Mass was established in essence by Pope Saint Damasus who reigned from AD 366-84. Words from Pope Innocent I (reigned AD 401-17) reveal that the Canon of the Mass was already established and received as something sacred.
Next we turn to the Nobis quoque peccatoribus:

Of the 15 saints in the Nobis quoque peccatoribus, the first 8 saints are male; the last 7 saints are female:
1) John the Baptist
2) Stephen
3) Matthias the Apostle
4) Barnabas the companion of Saint Paul
5) Ignatius of Antioch, a martyr bishop
6) Alexander, a martyr Pope
7 & 8) Marcellinus and Peter were a priest and exorcist who were martyred together
9 & 10) Felicity and Perpetua were female martyrs from Africa
11) Agatha, a virgin martyr from Sicily
12) Lucy, a virgin martyr from Sicily
13) Agnes, a virgin martyr of Rome
14) Cecilia, a virgin martyr of Rome, patroness of music
15) Anastasia, a virgin martyr from Croatia.
When the Church invokes these saints, she receives the prayers of powerful intercessors in Heaven. Moreover, these saints remind us that we are a Church of martyrs, that the pathway to Heaven in cruciform.
Holy Saints of the Roman Canon, pray for us!
Do you enjoy reading Canterbury Tales by Taylor Marshall? Make it easier to receive daily posts. It’s free. Please click here to sign up by Feed or here to sign up by Email. Please also explore Taylor’s books about Catholicism at amazon.com.
Comment | Share | Tweet | Buffer | print | email