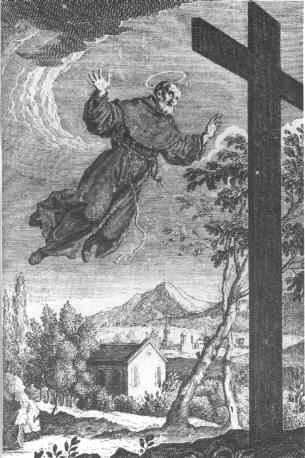 Saint Joseph of Cupertino was born on June 17, 1603 in the small town of Cupertino. His father died when he was young, leaving his mother with nothing but debt. Evicted from their home, little Joseph was born in a stable like Christ our Lord.
When Joseph was eight years old, he began to experience visions. His family thought he was lazy and ill-equipped for work. At the age of 17, he sought to enter the Conventual Franciscans but was rejected for his poor intellect. The Capuchin Franciscans accepted him as lay brother. His virtue and piety commended him to Holy Orders and he was ordained priest in 1625. Although he could hardly read, he seemed to possess a supernatural insight. He would only eat food on Thursdays and Sundays. As a priest, he celebrated seven Lents (40 days) of fasting per year. His life was one of continual penance.
He would enter into ecstasy whenever God, Mary, or the saints were mentioned. Often times, he would begin to levitate off the ground – so much so that the friars would tie him to objects. Simply seeing an image of the Blessed Virgin would send him floating.
Once, when he kissed the foot of the Pope, he also began to elevate into the air to the amazement of all nearby – the Holy Father included.
The friars tried to interrupt St Joseph’s ecstasy’s by striking him, poking him with needles, or by burning his flesh. Nothing would move him except the voice of his superior.
Joseph for thirty-five years was not allowed to attend choir, enter the common refectory, walk in procession, or say a public Mass since his appearance and elevations caused so much commotion.
He was beatified by Benedict XIV in 1753, and canonized 16 July 1767 by Clement XIII.
The collect for his Mass cryptically refers to his elevation and floating:
O God, who didst purpose to draw all things unto Thy Son when He was lifted up from the earth, mercifully grant that we, by the merits and example of Thy seraphic confessor Joseph, being lifted above all earthly desires, may be worthy to come unto Him. Who with Thee, liveth and reigneth, etc.
Do you enjoy reading Canterbury Tales by Taylor Marshall? Make it easier to receive daily posts. It’s free. Please click here to sign up by Feed or here to sign up by Email. Please also explore Taylor’s books about Catholicism at amazon.com.
Comment | Share | Tweet | Buffer | print | email