At Summa theologiae III, q. 64., a. 4 (see article at NewAdvent.org), Saint Thomas Aquinas asks whether Christ had the beatific vision from the moment of His Conception of the Holy Spirit in the womb of the Blessed Virgin. 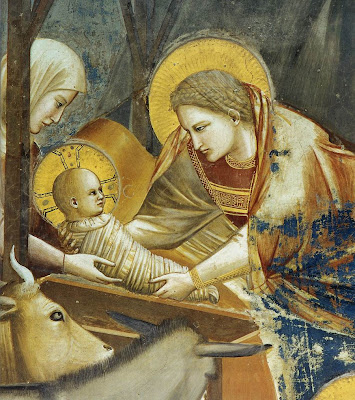 Before looking at the answer, it is useful to know that scholastic theologians distinguish between wayfairers (viators) and those who have already arrived in the homeland of heaven. Wayfairers are us on earth or in purgatory who are traveling to path of grace and trying to arrive at the beatific vision of God in heaven. The goal of the Christian life of grace is to finally arrive at the beatific vision of God’s essence.

So when the Word was made flesh and dwelt among us, did He retain the vision of the Divine essence? Did Christ have the beatific vision of this divine nature or did He somehow blind Himself of it? Is it something He lost at conception but regained later at His resurrection? These are questions that are currently very controversial in contemporary theological disputes.

Saint Thomas Aquinas teaches that Christ had the beatific vision perfectly from the moment of conception of the Holy Spirit:

I answer that, As appears from what was said above (Article 3), it was unbecoming that in His conception Christ should receive merely habitual grace without the act. Now, He received grace “not by measure” (John 3:34), as stated above (Question 7, Article 11). But the grace of the “wayfarer,” being short of that of the “comprehensor,” is in less measure than that of the comprehensor. Wherefore it is manifest that in the first instant of His conception Christ received not only as much grace as comprehensors have, but also greater than that which they all have. And because that grace was not without its act, it follows that He was a comprehensor in act, seeing God in His Essence more clearly than other creatures.

Reply to Objection 1. As stated above (Question 19, Article 3), Christ did not merit the glory of the soul, in respect of which He is said to have been a comprehensor, but the glory of the body, to which He came through His Passion. Wherefore the reply to the Second Objection is clear.

Reply to Objection 3. Since Christ was both God and man, He had, even in His humanity, something more than other creatures–namely, that He was in the state of beatitude from the very beginning.

The fact that Christ experienced the beatific vision from conception also reveals that Christ did not have faith or hope. He had the theological virtue of charity, but He did not have faith or hope. As Saint Paul taught, “Faith is the evidence of things that appear not,” but Christ has the full vision of God. Hence He does not have faith. Of course, Christ was faithful to His Mission and to the Father. He also had trust in the Father. Yet, the theological virtue of faith, strictly speaking, did not reside in His soul.

The same applies to the virtue of hope. Saint Paul taught: “What a man seeth, why doth he hope for?” Father Garrigou-Lagrange observes that, “St. Thomas and St. Bonaventure are of the opinion that the habit of faith cannot co-exist with the beatific vision. Thus St. Thomas says: “The object of faith is a divine thing not seen. But the habit of virtue… takes its species from the object. Hence, if we deny that the divine thing was not seen, we exclude the very essence of faith.”

This does not make Christ less human or imply a fault in Him. Rather, it makes Him so a great a Redeemer and Savior. He was fully divine and His soul was deified by the vision of His divine nature. By virtue of His created soul’s share in the beatific vision, He is able to share this mystery with our souls.