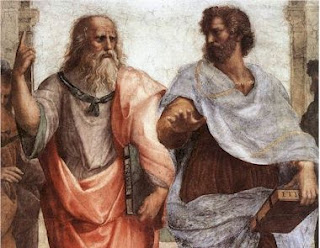 Plato and Aristotle
Plato says “Hey, forms are up there.”
Aristotle says, “Hey, forms are down in here.”
Unlike Plato and the early Platonists who posited two causes (Greek αἴτιον, aition), namely form and matter, Aristotle posited four causes. Aristotle’s argument against Plato regarding this topic is in Book 1 of his Metaphysics. Saint Thomas Aquinas also covers it in his Commentary on the Metaphysics.
By causes, Aristotle does not here mean something like cause and effect. The Greek word for cause, αἴτιον pronounced aition, is related to the Greek word meaning “responsible.” So the four causes are what are responsible for things. I tell my college students that the four causes are like the four “why’s.” To fully understand an object, we must know it’s four “why’s.”
Now Plato, it seems, held only to form and matter – that is formal causality and material causality. To these two, Aristotle added two more. Aristotle explains why this is in important in Metaphysics Book 1 (Big Alpha). Let’s take a look at all four causes:
Essentially, Aristotle includes not just form and matter (like Plato), but also motion (efficient cause) and purpose (final cause). This is why he is well suited for Catholic theology since goals and purposes are integral to reality. It is not enough to discuss the form and matter of things. Most important of all is “What is the purpose of it?” Aristotle provides for questions of teleology – the rationale for purpose and goals.
Let’s apply four causes to humans.
As another example, let’s see how St Thomas Aquinas applied the four causes to something non-physical. Here is how St Thomas applies the four causes to law:
According to St Thomas, if a law is missing any of the four causes, it is not a law.
Scholastics believed that the four causes must be given in a solid definition. This is why law is defined as a “a precept of reason promulgated by proper authority for the common good.”
Once you start thinking with the four causes in mind, you will become a sharper thinker and a better communicator.
If you’re catching on and enjoying this, check out this post I wrote on how the Council of Trent applied the Aristotelian causes to human salvation to refute the errors of Martin Luther.
Do you enjoy reading Canterbury Tales by Taylor Marshall? Make it easier to receive daily posts. It’s free. Please click here to sign up by Feed or here to sign up by Email. Please also explore Taylor’s books about Catholicism at amazon.com.
Comment | Share | Tweet | Buffer | print | email