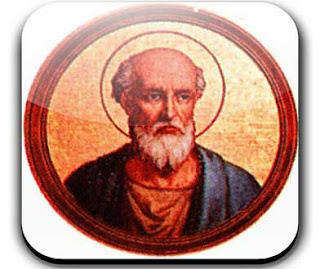 The exile of Saint Clement from Rome left the Church of Rome in need of a new shepherd. Pope Saint Evaristus succeded Clement as the fifth Bisohp of Rome, having reigned from about AD 99 to 107 AD. His name in Greek means “well pleasing.” According to the Liber Pontificalis, he was “born in Greece of a Jewish father named Judah, originally from the city of Bethlehem.” Saint John, the last of the living Apostle, died either just before or during his pontificate. His pontificate was the first in which the personal authority of the Apostles was absent. This makes Saint Evaristus the first post-apostolic pope of the Catholic Church.

Pope Saint Evaristus persevered under the persecution of Domitian, which is reckoned by Catholics as the Second Roman Persecution. He divided among the priests the titles of the city of Rome. Titles were approved and ratified places of worship apart from the liturgy of the Pope. The Latin word titulus as term for a Roman parish is interesting. It probably derives from the Old Latin (and Vulgate) version of the Holy Bible, in which it is said that Jacob erected a title or altar to the Lord:

And trembling, he said: How terrible is this place? This is no other but the house of God, and the gate of heaven. And Jacob arising in the morning, took the stone which he had laid under his head, and set it up for a title {titulum}, pouring oil upon the top of it (Gen 28:17-18).

According to the Roman way of seeing things, each validly erected altar in the city was a titulus erected by their patriarch—the Bishop of Rome. Hence, to have valid worship and communion with the Pope, one had to worship and receive the sacraments from a properly appoint titulus. As we read in 1 Clement above, Pope Saint Clement had already established the custom of proper places of worship: “Where and by whom He desires these things to be done, He Himself has fixed by His own supreme will, in order that all things being piously done according to His good pleasure, may be acceptable unto Him.”
Saint Ignatius of Antioch, a contemporary of Saint Evaristus, orders the same:

Let that Eucharist be held valid which is offered by the bishop or by the one to whom the bishop has committed this charge. Wherever the bishop appears, there let the people be; as wherever Jesus Christ is, there is the Catholic Church.

Both in Antioch and Rome, the bishops were dealing with a new problem—the church was growing quickly. The faithful could not attend the Eucharist of the bishop. Rather, delegates were appointed by the bishop for the celebration of the Holy Sacrifice. In the writings of Saint Ignatius we find that the faithful should attend the Eucharist of the bishop or the Eucharist offered “by one to whom the bishop has committed this charge.” It comes to no surprise that during the same exact decade, the Bishop of Rome, Saint Evaristus, has appointed priests to the seven titular churches of Rome. This appointment of priests and titular churches in the city reveals that Christianity in Rome was now spread throughout the population of Rome. We also learn that Pope Saint Evaristus appointed seven deacons to assist him in ministering to the city. It would seem that these seven deacons served the seven titular churches of Rome. The Liber also records that he promoted six priests, two deacons and five bishops, destined for various churches. Evaristus received the crown of martyrdom in his ardent love for Christ. He was buried near the body of Blessed Peter in the Vatican, on October 25. His feast day is October 26. The throne of Saint Peter remained vacant for nineteen days until his successor, Pope Saint Alexander I was raised to the dignity of Bishop of Rome and Vicar of Christ.

The selection above is from Taylor Marshall’s forthcoming book: The Eternal City: Rome and Origins of Catholic Christianity