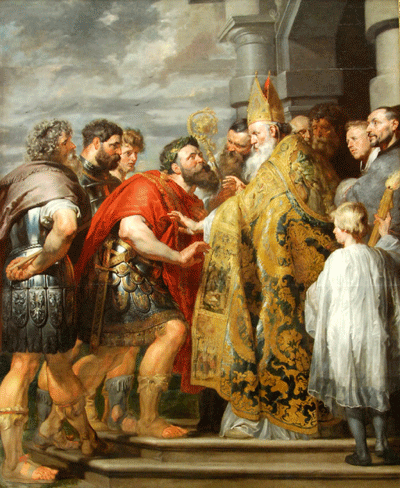 Saint Ambrose (right) disciplines Emperor Theodosius (left)
In AD 390, the Christian Roman Emperor Theodosius was threatened with excommunication by Saint Ambrose of Milan for having ordered the massacre of all the spectators in the Thessalonian circus as retaliation for a local uprising. Saint Ambrose ordered months of penance for the Emperor who was then  allowed once again to receive Holy Communion at the hand of Saint Ambrose.
Shortly after this date, the Roman Emperor Theodosius began to zealously criminalize the practice of paganism in the Roman Empire. (Paganism refers to any polytheistic cult of worship. For example, the worship of Jupiter, Juno, Minerva, Mars.) Emperor Theodosius accomplished this by passing anti-pagan laws and by destroying pagan temples. He abolished pagan holidays, criminalized witchcraft, snuffed out the eternal fire at the Temple of Vesta in the Roman Forum, and disbanded the Vestal Virgins.
The Olympic Games were traditionally held in honor of Zeus and the Olympiad gods. The Games were also well known for their athletic nudity (did they have also have beach volley ball?!). These Olympic Games, being celebrated every four years, were due to be held in AD 393. Emperor Theodosius condemned and banned the Olympic Games as pagan and unworthy of Christian culture, with the approval of the Catholic bishops (Saint Ambrose in particular). The Olympics were seen as one of the most popular pagan celebrations in the Empire, and so they came to an end in that year.
Under Christian rule, the Olympics remained forgotten for over 1,400 years.
In 1796, the anti-Christian regime of revolutionary France re-instituted the Olympic Games, but it was short lived. The Olympics were celebrated again in England in the 1850s. The Greeks began to hold Olympic Games in the 1870s. The International Olympics that we know today began in 1896 and have been held every four years (with several exceptions) till this very year.
Do you enjoy reading Canterbury Tales by Taylor Marshall? Make it easier to receive daily posts. It’s free. Please click here to sign up by Feed or here to sign up by Email. Please also explore Taylor’s books about Catholicism at amazon.com.
Comment | Share | Tweet | Buffer | print | email