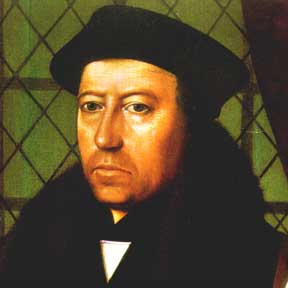 Thomas Cranmer – the Greatest Rascal Archbishop of England
I received an email from Harry after the EWTN The Journey Home interview on July 2 asking this same question: Do Anglicans have a valid Mass?
Here’s the short answer: No, Anglicans or Episcopalians (the tradition deriving from Henry VIII’s Church of England) do not have a valid Eucharist. This question was settled by His Holiness Pope Leo XIII in his papal bull Apostolicae Curae on the nullity of Anglican orders, issued 18 September, 1896.

There are two reasons for the nullity of Anglican Holy Orders. After explaining these two reasons, I’ll respond to the objection that Anglicans/Episcopalians have since “revitalized” their Apostolic Succession through the intervention of schismatic bishops of the Old Catholic/Orthodox/Polish National Catholic communities.

There are two reasons for the invalidity of Anglican Orders and Eucharist:

1547 King Henry VIII died
After the king’s death, Archbishop Thomas Cranmer (a Catholic bishop who had been secretly married) immediately began Protestantizing the Church of England that King Henry VIII had severed from Rome.
In 1547, Peter Martyr Vermigli (a former Augustinian priest who married and became Protestant) and Bernardino Ochino (a former Franciscan priest who married and became Protestant) were both invited to England by Archbishop Thomas Cranmer, and given a pension of forty marks by the crown.
In 1548 the Protestantized Vermigli was appointed Regius Professor of Divinity at Oxford.
In 1549 Vermigli took part in a great disputation on the Eucharist. Here, Luther’s doctrine of sacramental union of the bread and Christ (sometimes called consubstantiation) was publicly denied. Vermigli instead endorsed the Calvinistic teaching that the Real Presence of Christ was conditioned by the subjective faith of the recipient. For Vermigli, Christ was not objectively present in the Eucharist at all.
In 1549, Archbishop Thomas Cranmer rejected the Latin Mass. Thomas Cranmer invited the arch-Protestant Martin Bucer and Peter Martyr Vermigli to advise him in the liturgies of the Church of England. Cranmer composed his own vernacular liturgies. The Mass came to be called the service of “Holy Communion.”
In 1550, Cranmer changed the Ordinal – the Ordination rite for the Church of England. This is the official date by which Holy Orders ceased in England.
1553-1558 Queen Mary restored Catholicism to England (along with valid clergy and all seven valid sacraments). Mary had Archbishop Cranmer burned at the stake as a heretic.
1559 Queen Elizabeth I re-issued Archbishop Thomas Cranmer’s Book of Common Prayer with it’s faulty ordination rites and liturgies.

It is clear to all that the liturgy influenced and produced by Vermigli, Bucer, Ochino, and Cranmer was a flat out rejection of the Holy Sacrifice of the Mass. These are the same liturgies officially adopted by Anglicans to this day. While there have been modifications over time (eg 1928 BCP and the Scottish BCPs), they are essentially the same rites with the same theology.

Second Reason Against Anglican Eucharist: Invalid Form of Priestly Intent
The 39 Articles are still the doctrinal formulary of Anglicanism. It is a public document. All clergy in the Church of England had to swear to the 39 Articles which officially rejected transubstantiation. American Episcopalians claim that they don’t necessarily make this vow, but it’s assumed since the document is appended to the ordination rite. The Anglican formulary which all Anglican clerics affirmed reads:

Transubstantiation (or the change of the substance of Bread and Wine) in the Supper of the Lord, cannot be proved by Holy Writ; but is repugnant to the plain words of Scripture, overthroweth the nature of a Sacrament, and hath given occasion to many superstitions. {Here they vainly claim that “transubstantiation” overthrows the sacrament – that’s rather strong language!}

The Sacrament of the Lord’s Supper was not by Christ’s ordinance reserved, carried about, lifted up, or worshipped. {Notice this forbids the use of tabernacles, monstrances, and Eucharistic processions}

This is a public document expressing the beliefs of Anglicans. It thereby expresses the intent of the minister when he confects the sacrament. Many Anglican priests reject this doctrine of the 39 Articles (they call themselves Anglo-Catholics), but that doesn’t much matter. A public document containing a public heresy must be publicly repudiated and disavowed. Yet, if one were to do this, he would not longer be Anglican. He’d be an independent Catholic claiming to have Holy Orders. Until an Anglican priest makes this public disavowal of heresy, he is still submitting to it and cooperating with it. Moreover, most Anglo-Catholic priests tolerate these public errors as espoused by their bishops and brother clergy.
A real Catholic would perceive the words of the 39 Articles as a grave and public crime against the Kingship of Christ. The 39 Articles are a blasphemous denial of transubstantiation and also of the revered doctrine that the Eucharist should be reserved or lifted up. A real Catholic would publicly recant of these errors. Anglo-Catholics, instead, wink at the Anglican error regarding the most Blessed Sacrament and pretend that they have everything in common with Catholic priests. The truth is that the Book of Common Prayer was built and structured to frame the Calvinistic theology of Cranmer, Bucer, and Vermigli. A false theology that holds that Christ is not objectively present in the Blessed Sacrament.
What about the claim of a “revitalized” Anglican Apostolic Succession?
Now then, there are Anglo-Catholic priests that have received valid ordinations by dissenting Catholic bishops and who openly profess belief in transubstantiation. Is their Mass valid? Perhaps. Yet many of these priests openly concelebrate with “women priests” or allow “women deacons” to serve their liturgies. This alone reveals that they do not believe in the Catholic doctrine of the priesthood and Eucharist. The orthodox doctrine of Holy Order prohibits the ordination of women to any degree of Holy Orders (even to the ministerial diaconate).
Those Anglo-Catholics who do not compromise by serving alongside women clerics are still living a double life. Even if a man were validly ordained and had proper intent to consecrate and sacrifice, his willingness to consecrate the Body and Blood of Christ apart from the Holy Father in Rome renders every consecration as an act of schism. While the Mass is itself valid and glorifying to God, it is still a sacrilege for the priest who celebrates it. Think of a Catholic priest. If the priest is in mortal sin, he commits sacrilege, but his Mass is valid.
The Catholic priesthood and the Eucharist were never meant to be severed apart from the Pope and the local Catholic bishop. As Saint Ignatius of Antioch said, where the Catholic bishop is, there is the Catholic Church.
Summary
The Church of England officially denied the sacerdotal and sacrificial priesthood of the Catholic Church including her belief in transubstantiation. This is seen today in the Anglican belief that women can be validly ordained. This entails that Anglicanism does not and never has enjoyed a valid priesthood. Even if there are rare exceptions, it would be objectively evil for such priests to celebrate the Mass while being in schism with the Holy Father of Rome.

Consolation for Anglican Clergy
Having been an Anglican clergyman, I was uncomfortable with the teach of Apostolicae Curae and it’s conclusion that Anglican Orders were utterly null and void. Pope Leo XIII offers these comforting words to those Anglican clerics who make the difficult and burdensome decision to repudiate their ministry and enter in to the Catholic Church. The Pope promises that they will receive a special hope and reward on the Last Day. This is the beautiful conclusion to Apostolicae Curae:

39. We wish to direct our exhortation and our desires in a special way to those who are ministers of religion in their respective communities. They are men who from their very office take precedence in learning and authority, and who have at heart the glory of God and the salvation of souls. Let them be the first in joyfully submitting to the divine call and obey it, and furnish a glorious example to others.

Assuredly, with an exceeding great joy, their Mother, the Church, will welcome them, and will cherish with all her love and care those whom the strength of their generous souls has, amidst many trials and difficulties, led back to her bosom. Nor could words express the recognition which this devoted courage will win for them from the assemblies of the brethren throughout the Catholic world, or what hope or confidence it will merit for them before Christ as their Judge, or what reward it will obtain from Him in the heavenly kingdom! And we, ourselves, in every lawful way, shall continue to promote their reconciliation with the Church in which individuals and masses, as we ardently desire, may find so much for their imitation. In the meantime, by the tender mercy of the Lord our God, we ask and beseech all to strive faithfully to follow in the path of divine grace and truth.

May our separated Anglican brothers and sisters find a comfortable home in the bosom of Holy Mother the Church. We should pray and fast for them to receive these special graces. Moreover, we should be kind and patient as they come into the Catholic Church.

Priest Dancing with Altar Servers? I just can't even

Pope Francis and the German Catholic Problem (Plus Blessings this week)

Desecrations in California and Flames in France: Who does this?