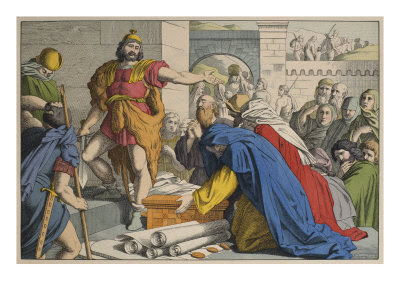 The “Maccabees,” or more properly the Hasmoneans, were a Jewish priestly family that led the just rebellion against the Greco-Syrians under Antiochus IV Epiphanes in the second century before Christ.
The Maccabees were led by Mathathias and then by his third son Judas “Maccabeus.” The nickname comes from the Aramaic maccaba meaning “hammer.” So his name was “Judas the Hammer.” The nickname “Maccaba” was extended to the entire family and descendants of Mathathias. The nickname, no doubt, refers to Judas’ “hammering” of the enemies of God in battle. The true patronymic of the family was Hasmonean.
In 1 Maccabees, the pagan Antiochus forbids the practice of the Old Testament – no circumcision, sacrifice, Passover, or reading of Scripture. Moreover, the Jews are required to eat pork and worship the Greek gods.
Mathathias Hasmonean sparks a revolt by slaying a Jew who worshipped a pagan idol. He and his five sons then fled into the dessert where they assemble an army dedicated to God. Mathathias dies and his son Judas Maccabeus organizes a guerrilla war against their Greek persecutors.
Judas Maccabeus and his soldiers miraculously gain the upper hand against the sophisticated Greek occupiers. Finally, they recapture Jerusalem, destroy the Greek idols, cleanse the temple and have it rededicated to the true worship of God.
The Jewish festival of Hanukkah commemorates the re-dedication of the temple following Judas Maccabeus’ victory over the Greeks. According to tradition, the victorious Jews could only find a small amount of oil that had remained kosher by virtue of a seal. Although it only contained enough oil to sustain the temple menorah for one day, it miraculously endured for eight days, by which time further oil could be procured – this is the origin of the eight days of Hanukkah.
If you want to introduce young people to an exciting book of the Old Testament, start them off on 1 Maccabees. It’s a great read.
Do you enjoy reading Canterbury Tales by Taylor Marshall? Make it easier to receive daily posts. It’s free. Please click here to sign up by Feed or here to sign up by Email. Please also explore Taylor’s books about Catholicism at amazon.com.
Comment | Share | Tweet | Buffer | print | email

They need us to be Perfect Consumer Slaves | Dr Taylor Marshall

Support Dr. Taylor Marshall on Patreon and get signed books:...
06:33

Original Podcast: https://www.youtube.com/watch?v=-dXSS9op2_4 Please Like this video with Thumbs Up...
01:45