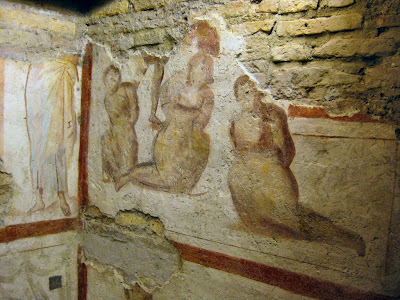 Saints John and Paul were martyred at Rome on 26 June under the Emperor Julian the Apostate (AD 361–3). Their two names are included in the Roman Canon of the Holy Mass.
Today’s two martyrs were provosts of Constance who was the daughter of Constantine the Great. They had received a vast inheritance from Constance and were very wealthy. SS. John and Paul became famous in Rome as they used this fortune for the relief of the poor.
The Emperor Julian the Apostate coveted these riches. This wicked emperor commanded SS. John and Paul to serve him as they had once served Constantine and his son.
Then they said to him: “When the glorious Constantine and Constant his son glorified them to be Christian, we would well serve them, but since thou hast forsaken thy religion full of virtues, we be departed from thee, and we will no more serve thee.”
Julian then said to them: “If ye do not my will within ten days with your agreement, ye shall do it after against your will.”
The saints said to him: “Think ye as though now the ten days were gone, and do this day that which thou purposes to do then.”
Then John and Paul during these ten days emended to prayer and to alms on the tenth day, Terentian was sent to them, who said to them: “Our lord Julian hath sent me to you, that ye should honour the image of Jupiter, which we to you, or else ye must die.”
Then they said to him: “If Julian be thy lord have thou peace with him, we have none other Lord but Jesu Christ.”

An evil demon entered into the son of Terentian and he began to cry in that house that he was burnt of the devil. When Terentian saw this, he knowledged his sin, became a Christian, and put in writing the passion of these two holy saints. His son was delivered of the devil.

Byzantius, a Roman senator, and Saint Pammachius, his son, transformed the home of Sts John and Paul into a Christian church.

The rooms on the ground-floor of the house of SS. John and Paul were rediscovered under the Basilica of Santi Giovanni e Paolo in Rome. They are decorated with frescoes, while the original tomb of SS. John and Paul is covered with paintings of which the martyrs are the subject. See the photo above.
Their feast is kept on 26 June. Great and powerful martyrs for Christ.
SS. John and Paul, pray for us.
Do you enjoy reading Canterbury Tales by Taylor Marshall? Make it easier to receive daily posts. It’s free. Please click here to sign up by Feed or here to sign up by Email. Please also explore Taylor’s books about Catholicism at amazon.com.
Comment | Share | Tweet | Buffer | print | email