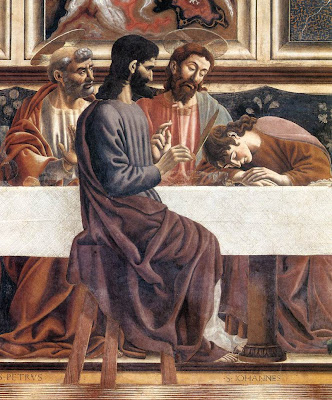 Judas was not converted while partaking of the sacred mysteries. Hence on both sides his crime becomes the more heinous, both because imbued with such a purpose he approached the mysteries, and because he became none the better for approaching, neither from fear, nor from the benefit received, nor from the honor conferred on him.”

And this would have been quite proper [to refuse Judas the Eucharist], if the malice of Judas be considered. But since Christ was to serve us as a pattern of justice, it was not in keeping with His teaching authority to sever Judas, a hidden sinner, from Communion with the others without an accuser and evident proof. lest the Church’s prelates might have an example for doing the like, and lest Judas himself being exasperated might take occasion of sinning.

This reveals that secret sinners continue to receive the Holy Eucharist. But this begs the question. What about public sinners? The Chruch Fathers and Saint Thomas Aquinas say that public sinners should not be allowed to receive the Holy Eucharist. For Saint Augustine’s take, see Summa theologiae III q. 80, a. 6.
This post was gleaned from passages in Saint Thomas’ Summa theologiae.
PS: And remember: Judas Iscariot was the first person to leave Mass early. Don’t be a Judas. Stay through to the end of Holy Mass.
Do you enjoy reading Canterbury Tales by Taylor Marshall? Make it easier to receive daily posts. It’s free. Please click here to sign up by Feed or here to sign up by Email. Please also explore Taylor’s books about Catholicism at amazon.com.
* Those that read Canterbury Tales Blog have probably noticed that I don’t affix the annoying “Pseudo-” to Dionysius the Areopagite. Join our Facebook group for people who agree.
Comment | Share | Tweet | Buffer | print | email