Are unicorns in the Bible? Daniel from Houston writes: “I was wondering if you could write about the unicorns in Psalm 91/92 and the other mythological beasts in Job on your blog.” 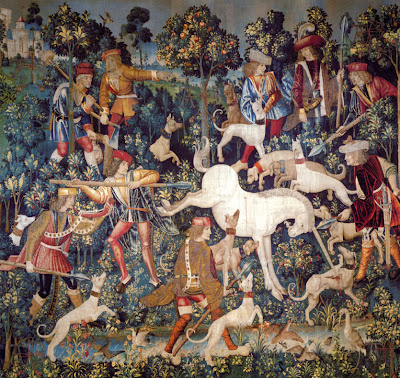 For brevity sake, let’s limit ourselves to unicorns and leave the beasts of Job alone for now. The Greek Septuagint and the Latin Vulgate and many English translations (King James and Douay Rheims) speak of monokeroi (Greek for “one horn”) or unicorns (Latin for “one horn”). Strange right?

{I used Catholic Logos Bible Software to generate this finding. To get this software and receive 15% off your purchase, use my name MARSHALL as a coupon code with Logos after clicking here.}

To make things even more interesting, medieval monarchs and monasteries boasted in owning unicorn horns. For example, a real unicorn horn was kept in the Cathedral of St. Denis in France. At one point even the Holy See listed a unicorn horn among its possessions. Once when the son of King James was ill, the doctors had him drink some powered unicorn horn to heal him.

From where did these unicorns horns arise?

Vikings, most likely. Vikings and other northern traders were able to sell “unicorn horns” for many times their weight in gold. From where were these nordic traders getting unicorn horns? Modern investigation reveals that these horns derived form the narwhal. Narwhals are mammals with one single large tusk that they use to break up sea ice. You can see a picture of one below:

Narwhals live in the environs of the Arctic Ocean. The horn of the narwal is identical to the horns depicted in medieval art on the heads of white horses. It seems that Vikings and nordic traders were able to sell these horns to Europeans and make a quick buck. Europeans down south had never seen narwhals and would never be the wiser.

Yet, the tradition of biblical unicorns doesn’t come from narwhals at all. The Greek Septuagint which depicts monokeroi or unicorns was written before Christ…over one thousand years before the tradition of the narwhal horn trade and white “horse-unicorns.”

Saint Isidore of Seville, a Doctor of the Church who lived (AD 560-636), tells us precisely what is meant by a unicorn:

The Greek word rhinoceros, meaning “with horn in nose,” refers to the same beast as the names monoceros or unicorn. This is a four-footed beast that has a single horn on its forehead; it is very strong and pierces anything it attacks. It fights with elephants and kills them by wounding them in the belly. The unicorn is too strong to be caught by hunters, except by a trick: if a virgin girl is placed in front of a unicorn and she bares her breast to it, all of its fierceness will cease and it will lay its head on her bosom, and thus quieted is easily caught (Etymologies, Book 12, 2:12-13).

St Isidore is clearly describing what we know as the rhinoceros. However, he may also be the source for the legend that unicorns can be tamed by virgins with bare breasts. Medieval tapestries and art often show a bare-breasted virgin with a horse-unicorn resting its head on her lap.

Somewhere between AD 600 and AD 1500 the term unicorn went from meaning rhinoceros to meaning “white horse with a narwhal horn on its head.”

I wonder if the rascally Viking salesmen had something to do with it!