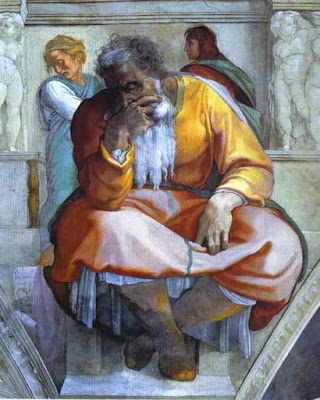 The Sinless Jeremias the Prophet by Michaelangelo
Jonathan Prester, a CTales reader, asks a great question concerning Saint Joseph and the Prophet Jeremias:

St. Joseph’s “confirmation in grace” makes perfect sense to me in light of the Holy Family’s role in the Incarnation, and St. John the Baptist’s similar confirmation is, as far as I’m concerned, downright biblical.  I wonder, though, why does tradition single out Jeremiah, of all the prophets, for a similar honor?  His seeming distance from the Incarnation makes that instance seem more peculiar (and thus piques my curiosity).

He is referring to Jeremias 1:5:

“Before I formed thee in the bowels of thy mother, I knew thee: and before thou camest forth out of the womb, I sanctified thee, and made thee a prophet unto the nations.” (Jeremiah 1:5, D-R)

So I looked it up in Cornelius a Lapide.
Lapide says that Jeremias was the one prophet of the OT who was sanctified in the womb for the reason that by his holiness he sustained Jerusalem and the assembly of Israel at the most difficult time in Old Testament history – the exile.
Also, Jeremias was a prophet not only to the Jews but also the Gentiles:
et antequam exires de vulva, sanctificavi te,
et prophetam in gentibus dedi te. (Jer 1:4)
So in this way, Jeremias belonged to the New Covenant in a mystical sense.
I would also add, though Lapide doesn’t say it, that Jeremias appears again in 2 Maccabees as the special advocate of Jerusalem.

“Then Onias answering, said: This is a lover of his brethren, and of the people of Israel: this is he that prayeth much for the people, and for all the holy city, Jeremias, the prophet of God.” (2 Maccabees 15:14, D-R)

Jeremias is certainly seen as an advocate for the people – the holiest man of all the Old Covenant prophets.
ad Jesum per Mariam,
Taylor
Do you enjoy reading Canterbury Tales by Taylor Marshall? Make it easier to receive daily posts. It’s free. Please click here to sign up by Feed or here to sign up by Email. Please also explore Taylor’s books about Catholicism at amazon.com.
Comment | Share | Tweet | Buffer | print | email